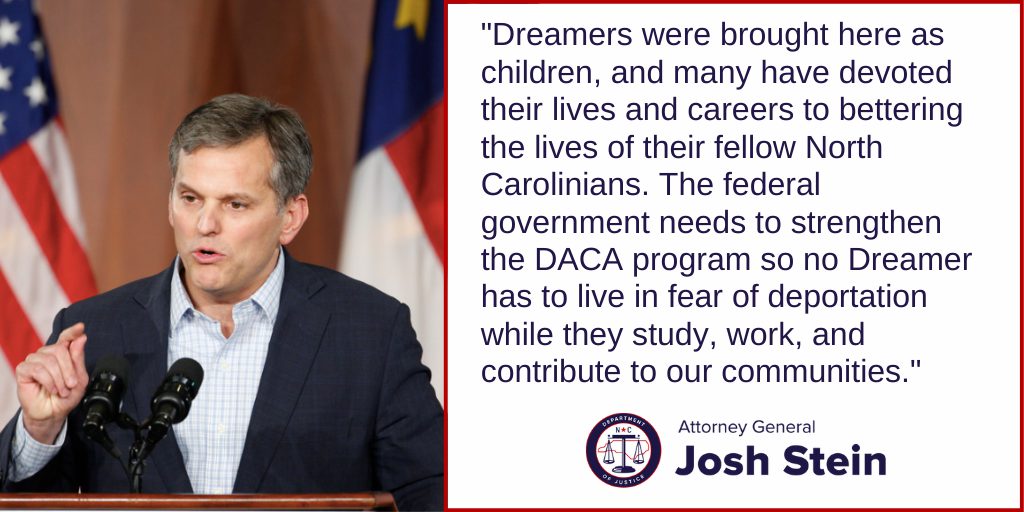 (RALEIGH) Attorney General Josh Stein today wrote to the federal government in support of its efforts to preserve and fortify the Deferred Action for Childhood Arrivals (DACA) program. In the comment letter, Attorney General Stein and 23 other attorneys general highlight the critical contributions of hundreds of thousands of Dreamers to public health efforts, the economy, and communities across the country.

“Dreamers were brought here as children, and many have devoted their lives and careers to bettering the lives of their fellow North Carolinians,” said Attorney General Josh Stein. “The federal government needs to strengthen the DACA program so no Dreamer has to live in fear of deportation while they study, work, and contribute to our communities.”

Since 2012, DACA has allowed approximately 825,000 people who grew up in this country, most of whom have known no home other than the United States, to live, study, and work across the country free from the fear of being forcibly separated from their families and communities. DACA has enabled hundreds of thousands of grantees to enroll in colleges and universities, complete their education, start businesses that help improve our economy, and give back to our communities as teachers, medical professionals, engineers, and entrepreneurs — all on the books.

North Carolina is home to approximately 24,000 DACA grantees. These people came to the country as children and were granted DACA status after paying application fees, submitting to and passing background checks, and applying for work permits. DACA grantees contribute more than $81.7 million annually in state and local taxes in North Carolina.

These contributions became especially evident as the deadly coronavirus pandemic began to sweep through the nation and thousands of DACA recipients stood, and continue to stand, on the frontlines as essential workers. As of April 2020, an estimated 27,000 health care workers and support staff, depend on DACA for their authorization to work in the United States.

In the comment letter, the coalition asserts that DACA has public safety, public health, and economic benefits for the states. Contrary to the assertions by opponents of DACA, states are not harmed by the contributions of DACA recipients.