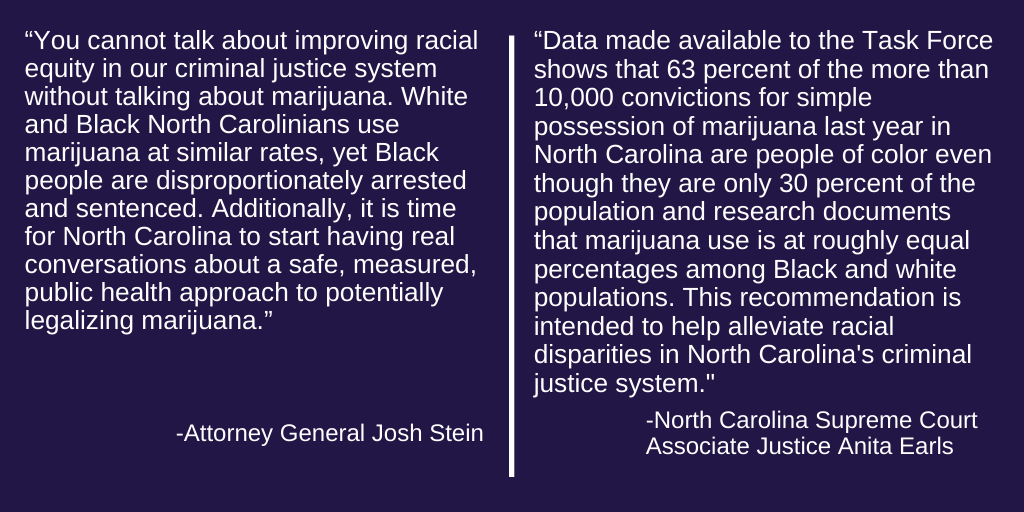 (RALEIGH) Attorney General Josh Stein announced that the North Carolina Task Force for Racial Equity in Criminal Justice, convened by Gov. Roy Cooper and co-chaired by Justice Anita Earls and the attorney general, adopted recommendations related to marijuana today. Those include a recommendation to decriminalize marijuana possession in small amounts and to further study potential legalization of marijuana possession, cultivation, and sale.

“You cannot talk about improving racial equity in our criminal justice system without talking about marijuana,” said Attorney General Josh Stein. “White and Black North Carolinians use marijuana at similar rates, yet Black people are disproportionately arrested and sentenced. Additionally, it is time for North Carolina to start having real conversations about a safe, measured, public health approach to potentially legalizing marijuana.”

“Data made available to the Task Force shows that 63 percent of the more than 10,000 convictions for simple possession of marijuana last year in North Carolina are people of color even though they are only 30 percent of the population and research documents that marijuana use is at roughly equal percentages among Black and white populations,” said Justice Anita Earls. “This recommendation is intended to help alleviate racial disparities in North Carolina’s criminal justice system.”

Right now, possession of up to ½ ounce of marijuana is a class 3 misdemeanor, not subject to imprisonment but subject to a fine up to $200. In 2019, there were 31,287 charges and 8,520 convictions for this offense; 61 percent of those convicted were nonwhite.

Possession of more than ½ ounce up to 1.5 ounces of marijuana is a class 1 misdemeanor, subject to up to 45 days imprisonment and a $200 fine. In 2019, there were 3,422 charges and 1,909 convictions for this offense; 70 percent of those convicted were nonwhite.

The Task Force will release its full recommendations in a report to Gov. Roy Cooper on Dec. 15, 2020. That date has been extended from Dec. 1 due to difficulty holding meetings and conducting work as a result of the pandemic. To view today’s public meeting, please visit the North Carolina Department of Justice’s YouTube channel. Information on previous recommendations and other Task Force action is available at https://ncdoj.gov/trec/.