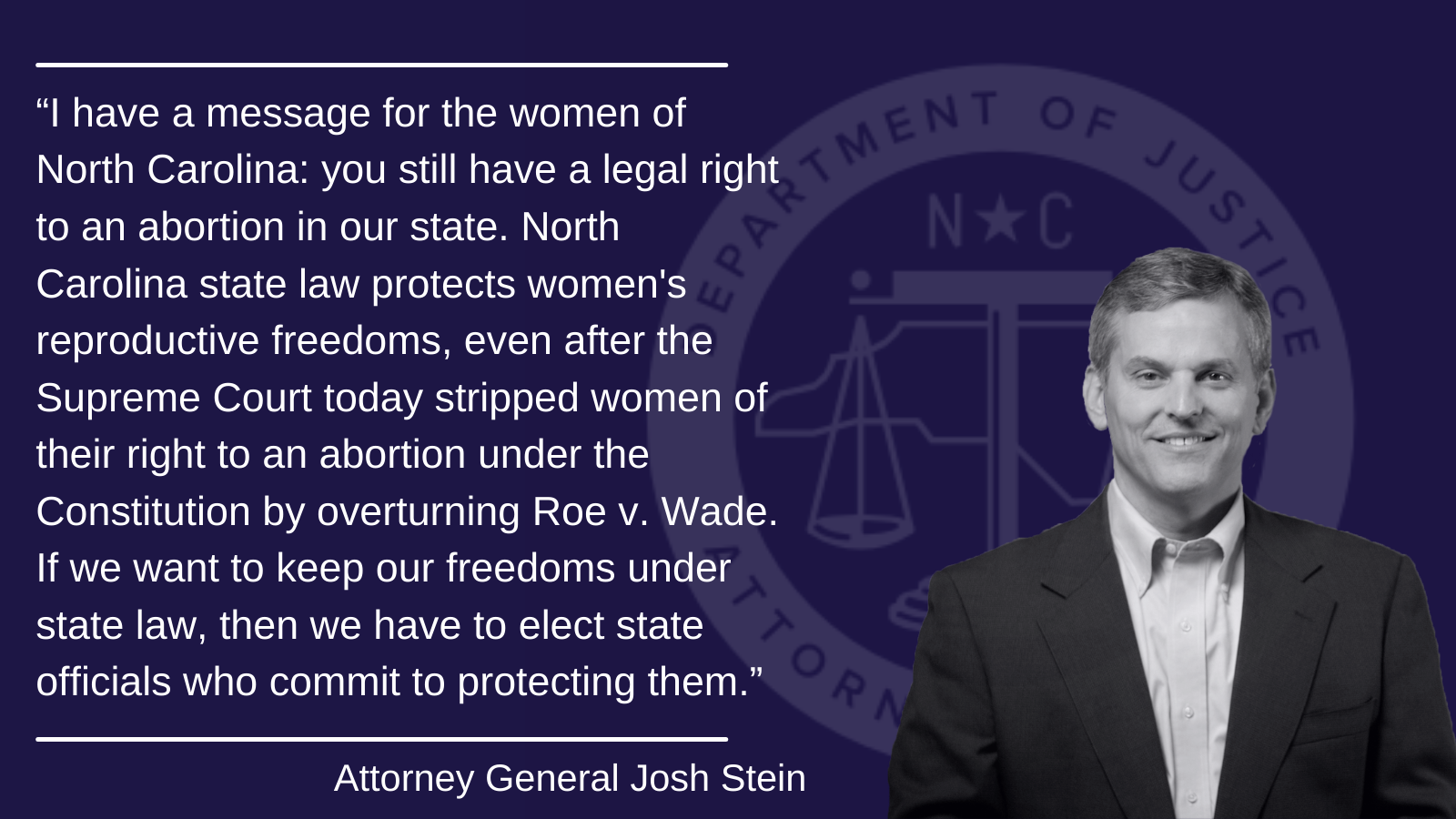 “I have a message for the women of North Carolina: you still have a legal right to an abortion in our state. North Carolina state law protects women’s reproductive freedoms, even after the Supreme Court today stripped women of their right to an abortion under the Constitution by overturning Roe v. Wade. If we want to keep our freedoms under state law, then we have to elect state officials who commit to protecting them.”

In addition, it states:

“It shall not be unlawful, after the twentieth week of a woman’s pregnancy, to advise, procure or cause a miscarriage or abortion when the procedure is performed by a qualified physician licensed to practice medicine in North Carolina in a hospital licensed by the Department of Health and Human Services, if there is a medical emergency as defined by G.S. 90-21.81(5)” N.C. Gen. Stat § 14-45.1(b).

“Medical emergency” is defined by statute as:

Roe v. Wade protected pregnant women against laws that would preclude or unduly restrict access to abortion services until the point of fetal viability. The U.S. Supreme Court’s reversal of Roe, however, does not curtail access to abortions in North Carolina that are expressly permitted by the above-quoted statutes. That protection could only be removed by a change in state law.

It should be noted that, in 2019, in the case of Bryant v. Woodall, a federal court in North Carolina extended the right to obtain an abortion beyond the 20-week deadline set forth in the statute, through the point of viability. The court permanently enjoined restrictions on access to abortions after 20 weeks of pregnancy “to the extent that the [statute’s ban on post-20-week abortions] prohibits any pre-viability abortions.” 363 F. Supp. 3d 611, 631 (M.D.N.C. 2019).

The ruling in Bryant v. Woodall was based on the teachings of Roe v. Wade and its progeny. As a result, the impact of Dobbs on Bryant v. Woodall’s ruling that currently allows for abortions after 20 weeks but before the point of viability will need to be determined. However, in North Carolina, even with Roe v. Wade overturned, abortions prior to 20 weeks, as well as abortions that are medically necessary, will remain legal unless the General Assembly changes the statutes and the Governor either signs the new provisions into law, or a gubernatorial veto is overridden.