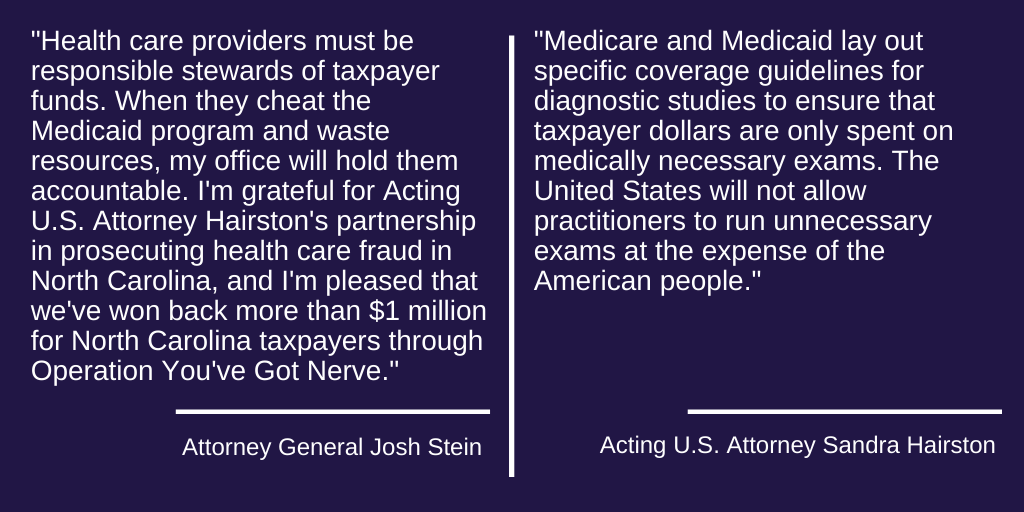 “Health care providers must be responsible stewards of taxpayer funds,” said Attorney General Josh Stein. “When they cheat the Medicaid program and waste resources, my office will hold them accountable. I’m grateful for Acting U.S. Attorney Hairston’s partnership in prosecuting health care fraud in North Carolina, and I’m pleased that we’ve won back more than $1 million for North Carolina taxpayers through Operation You’ve Got Nerve.”

“Medicare and Medicaid lay out specific coverage guidelines for diagnostic studies to ensure that taxpayer dollars are only spent on medically necessary exams,” said Acting U.S. Attorney Hairston. “The United States will not allow practitioners to run unnecessary exams at the expense of the American people.”

Between January 2015 and May 2020, the defendants allegedly submitted false or fraudulent claims for nerve conduction studies and arterial studies that were not medically reasonable or necessary, not supported by clinical documentation within the patient records, and not covered by the Medicare and/or North Carolina Medicaid program. As a result, they were reimbursed for funds that they were not entitled to.

The federal and North Carolina False Claims Acts authorize the governments to recover triple the money falsely obtained, plus substantial civil penalties for each false claim submitted. It should be noted that the civil claims resolved by settlement here are allegations only, and that there has been no judicial determination or admission of liability. The investigation and prosecution of this case was the result of a coordinated effort by the United States Attorney’s Office for the Middle District of North Carolina and the Medicaid Investigations Division of the North Carolina Attorney General’s Office.

The MID receives 75 percent of its funding from the U.S. Department of Health and Human Services under a grant award totaling $6,160,252 for Federal fiscal year (FY) 2020. The remaining 25 percent, totaling $2,053,414 for FY 2020, is funded by the State of North Carolina. MID and United States Attorney’s Offices (USAO) frequently collaborate on investigations concerning Medicaid fraud such that MID attorneys are designated as Special Assistant United States Attorneys in the USAOs throughout North Carolina.