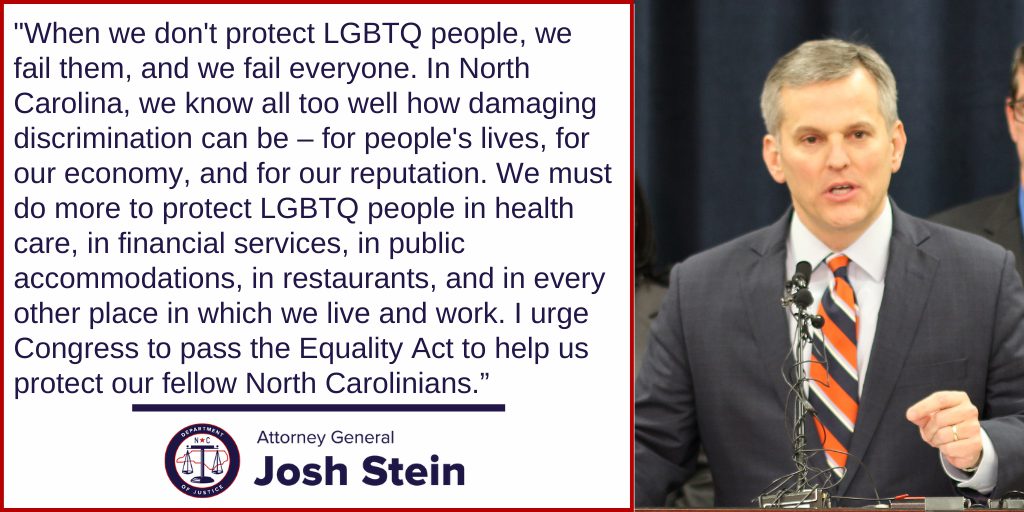 (RALEIGH) Attorney General Josh Stein today called on the U.S. Senate to pass the Equality Act, legislation that protects people from discrimination based on their sexual orientation and gender identity.

“When we don’t protect LGBTQ people, we fail them, and we fail everyone,” said Attorney General Josh Stein. “In North Carolina, we know all too well how damaging discrimination can be – for people’s lives, for our economy, and for our reputation. We must do more to protect LGBTQ people in health care, in financial services, in public accommodations, in restaurants, and in every other place in which we live and work. I urge Congress to pass the Equality Act to help us protect our fellow North Carolinians.”

In a letter to Senate leadership, Attorney General Stein and 24 other attorneys general urged Senate leadership to pass the Equality Act (H.R. 5) and make long-overdue updates to the nation’s civil rights laws. Without explicit federal prohibitions on discrimination based on sexual orientation and gender identity, LGBTQ people are left vulnerable to discrimination and don’t have legal recourse for such experiences. The Equality Act addresses these gaps by clarifying that existing protections under federal civil rights law include discrimination on the basis of sexual orientation and gender identity.

The legislation would strengthen federal legal protections for LGBTQ Americans by clarifying and modernizing federal civil rights law. It would also prohibit discrimination against LGBTQ individuals in employment, education, federally-funded programs, housing, public accommodations, credit, and jury service. In addition, the legislation expands the definition of public accommodations to expressly prohibit sex discrimination, such as denying services to people because they are pregnant or breastfeeding, or denying transgender people access to sex-specific restrooms corresponding to their gender identities. The legislation further clarifies that the U.S. attorney general may intervene in federal court actions alleging denial of equal protection of the laws based on sexual orientation and gender identity.

The Equality Act would allow state attorneys general to stand up for LGBTQ people in their states, by including them in the list of groups protected in legislation they regularly enforce, such as the Equal Credit Opportunity Act and the Fair Housing Act. The Equality Act would create a national standard that expands civil rights protections beyond the existing patchwork of state laws.