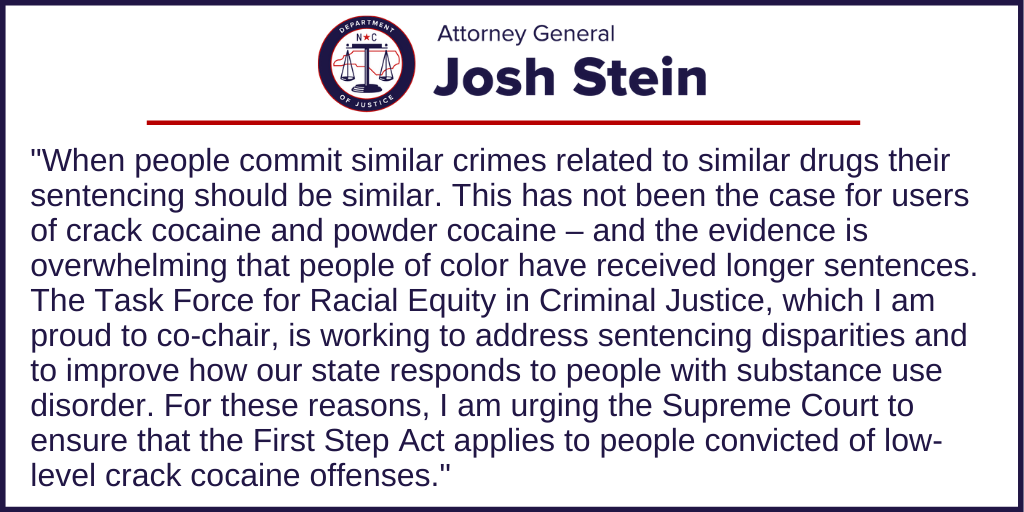 (RALEIGH) Attorney General Josh Stein urged the Supreme Court to affirm that people serving harsh sentences for low-level crack cocaine offenses can seek resentencing under the First Step Act, landmark criminal justice reform legislation that Congress passed in 2018. Attorney General Stein, along with a coalition of 18 attorneys general filed the amicus brief in Terry v. United States, a case concerning whether the resentencing reforms of the First Step Act extend to people convicted of the lowest-level crack cocaine offenses as they do to those convicted of higher-level offenses.

The coalition points to a universal consensus that sentencing that disproportionately punished users and dealers of crack cocaine over users and dealers of powder cocaine was unjust and had a disproportionate impact on communities of color. The attorneys general assert that Congress passed the First Step Act to right historic wrongs and intended that the law applies to all individuals—including the lowest-level offenders—who were sentenced extremely harshly under the previous federal guidelines.

“When people commit similar crimes related to similar drugs their sentencing should be similar,” said Attorney General Josh Stein. “This has not been the case for users of crack cocaine and powder cocaine – and the evidence is overwhelming that people of color have received longer sentences. The Task Force for Racial Equity in Criminal Justice, which I am proud to co-chair, is working to address sentencing disparities and to improve how our state responds to people with substance use disorder. For these reasons, I am urging the Supreme Court to ensure that the First Step Act applies to people convicted of low-level crack cocaine offenses.”

In the 1980s, the states and the federal government responded to the prevalence of crack cocaine and public panic about its supposedly unique dangers with aggressive penalties and targeted criminalization. Federal sentencing laws treated crack cocaine much more harshly than powder cocaine, with 100 times as much powder cocaine as crack cocaine needed to trigger the same penalties (this is known as the 100:1 ratio). Crack cocaine was also the only drug that carried a mandatory prison term for the first offense of simple possession.

Harsh penalties for crack cocaine exacerbated racial inequality in the justice system. Rates of drug use are statistically very similar across racial and ethnic lines, and roughly 80 percent of crack cocaine users in the United States are white or Hispanic, but most people historically sentenced for crack cocaine offenses are Black. For example, in 2006, around 80 percent of those convicted of crack offenses were Black. In part because of dramatically harsher treatment of crack cocaine offenses, the average prison time for Black people convicted of drug offenses increased by more than 77 percent from 1994 to 2003, compared to an increase of less than 33 percent for white people convicted of drug offenses.

In 2010, Congress passed the Fair Sentencing Act to reduce the disparity between sentences for crack cocaine and powder cocaine. However, the law did not help the many people sentenced for crack cocaine offenses before 2010 who remained in prison. The First Step Act, a bipartisan criminal justice reform bill passed in 2018, included a provision that made previous drug sentencing reforms retroactive, allowing those serving harsh sentences imposed under the former federal law to seek relief.

A copy of the amicus brief is available at: https://oag.dc.gov/sites/default/files/2021-02/Amicus-Brief-for-Step-Act.pdf