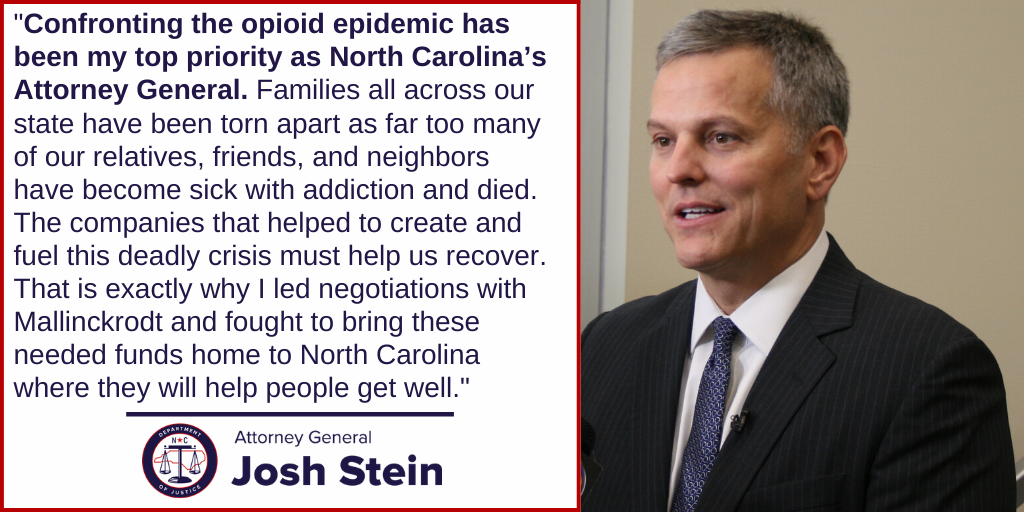 (RALEIGH) Attorney General Josh Stein today announced a global settlement framework agreement between state attorneys general, local subdivisions, and the opioid manufacturer Mallinckrodt (MNK), its subsidiaries, and certain other affiliates. MNK is currently the largest generic opioid manufacturer in the United States. In the agreement, MNK agrees to pay $1.6 billion in cash to a trust that will cover the costs of opioid addiction treatment and related efforts, with the potential for increased payment to the trust. MNK also agrees that its future generic opioid business will be subject to stringent injunctive relief that, among other things, will prevent marketing and ensure systems are in place to prevent drug misuse.

“Confronting the opioid epidemic has been my top priority as North Carolina’s Attorney General,” said Attorney General Josh Stein. “Families all across our state have been torn apart as far too many of our relatives, friends, and neighbors have become sick with addiction and died. The companies that helped to create and fuel this deadly crisis must help us recover. That is exactly why I led negotiations with Mallinckrodt and fought to bring these needed funds home to North Carolina where they will help people get well.”

Details about how much each state will receive, how the money will be distributed, and how the trust will be administered are all still being negotiated. In addition to today’s settlement, Attorney General Stein continues to play a lead role in negotiating with other opioid manufacturers and distributors to hold them accountable and bring needed resources back to North Carolina.