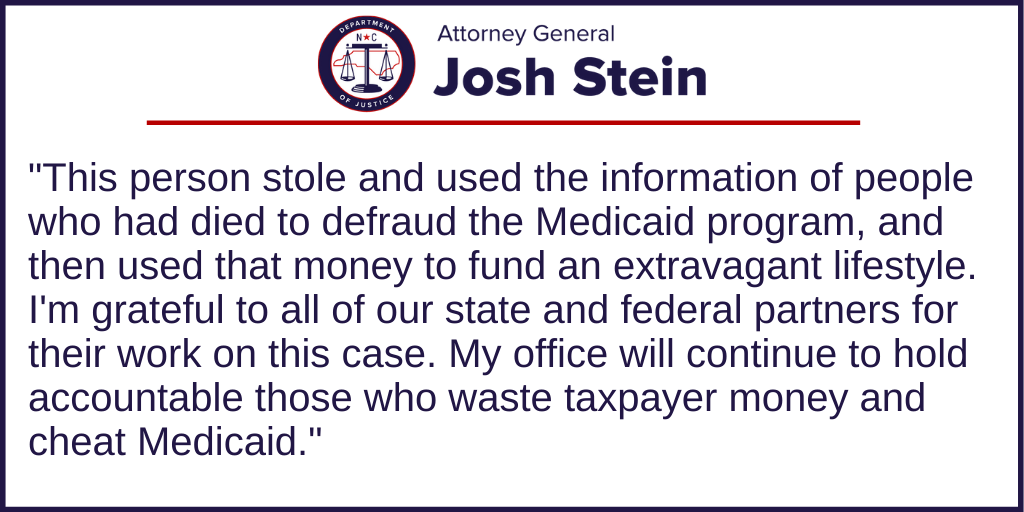 (RALEIGH) Attorney General Josh Stein today announced that Timothy Mark Harron of Las Vegas, Nevada, pleaded guilty to conspiracy to commit health care fraud and wire fraud, conspiracy to commit money laundering, and aggravated identity theft. He further agreed to forfeit the proceeds of his crimes, which in addition to cash include a private jet, a sports car, a pickup truck, real estate in eastern North Carolina, and hundreds of thousands of dollars in designer jewelry, clothing, and luxury items seized from his penthouse condominium.

“This person stole and used the information of people who had died to defraud the Medicaid program, and then used that money to fund an extravagant lifestyle,” said Attorney General Josh Stein. “I’m grateful to all of our state and federal partners for their work on this case. My office will continue to hold accountable those who waste taxpayer money and cheat Medicaid.”

Harron admitted to conspiring with his wife, Latisha Harron, to defraud the North Carolina Medicaid program by billing the government for fictitious home health services and laundering the proceeds of the fraud into, among other things, a British Aerospace Bae 125-800A Aircraft, a 2017 Aston Martin DB 11 sports car, a 2016 Ford F-150 Super-Crew pickup truck, and properties in Ahoskie and Rich Square, North Carolina.

Latisha Harron has already pleaded guilty to similar charges and is awaiting sentencing. According to the charges, she created and was operating Agape Healthcare Systems, Inc., an alleged Medicaid home health provider in Roanoke Rapids, North Carolina. In enrolling Agape as a Medicaid provider, she fraudulent concealed her prior felony conviction for identity theft and further continued to bill North Carolina’s Medicaid program even after moving to Maryland in 2012.

She moved to Las Vegas in 2017 to live with Timothy Harron, and they failed to disclose that he was also a previously convicted felon while expanding the Agape fraud to millions in the past few years. The Harrons searched obituary postings and other sources to gather information about recently deceased North Carolinians, and then used a Medicaid-exclusive tool to find people who were enrolled or eligible for Medicaid. They would use people’s Medicaid Identification Numbers to back-bill Medicaid for up to one year of home health services. Medicaid reimbursed millions to Agape, all of which flowed into accounts controlled by the Harrons.

About the Medicaid Investigations Division