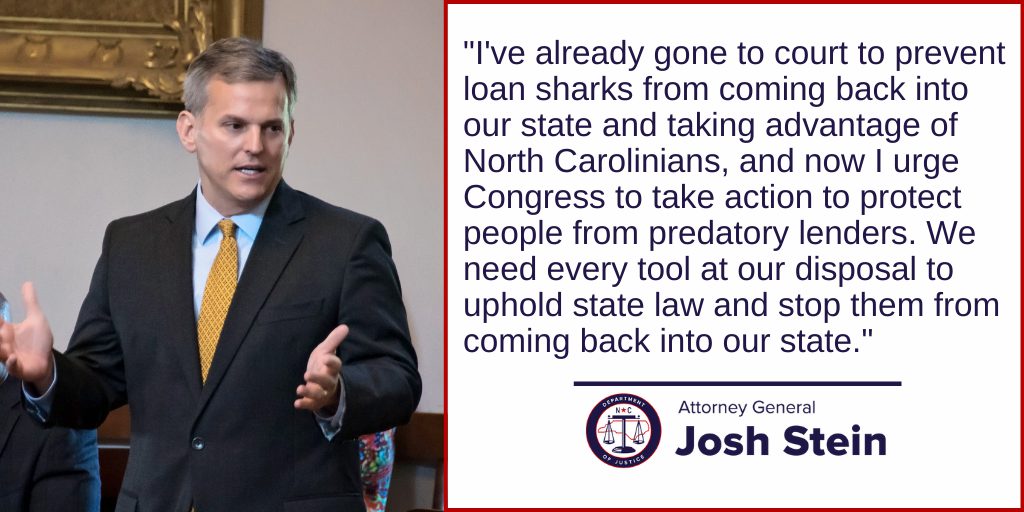 The bipartisan coalition of 25 attorneys general are calling for Congress to use the Congressional Review Act to rescind the rule from the Office of the Comptroller of the Currency (OCC). Through the rule, predatory lenders circumvent state interest rate caps through “rent-a-bank” schemes. Banks act as lenders in name only, passing along their state law exemptions to non-bank payday lenders. These arrangements would allow lenders to charge consumers rates that far exceed the rates permissible under North Carolina consumer protection laws.

Under the federal National Bank Act, national banks that are licensed and regulated by the Office of the Comptroller of the Currency (OCC) can charge interest on loans at the maximum rate permitted by their “home” state, even when that interest rate exceeds the 30 percent interest rate limit in North Carolina. National banks have this privilege because they are subject to extensive federal oversight and supervision. For years, non-bank entities such as payday, auto title, and installment lenders have attempted to partner with national banks to exploit these exemptions to offer ultra-high-rate loans in states where such loans are forbidden.

Courts have previously concluded that these non-bank lenders are not the “true lender” of the loan and must follow state interest rate limits. However, the so-called True Lender rule prevents courts from intervening if a national bank is either named as the lender on loan documents or the bank initially “funds” the loan. The rule also fails to require the bank to take any meaningful risk and is a departure from decades of OCC policy.

Attorney General Stein previously led a coalition of 24 states objecting to the rule when it was initially proposed by the Trump Administration and sued to stop its implementation in January. However, Congress can pass pending resolutions to repeal the rule and save years of litigation and more quickly protect people.