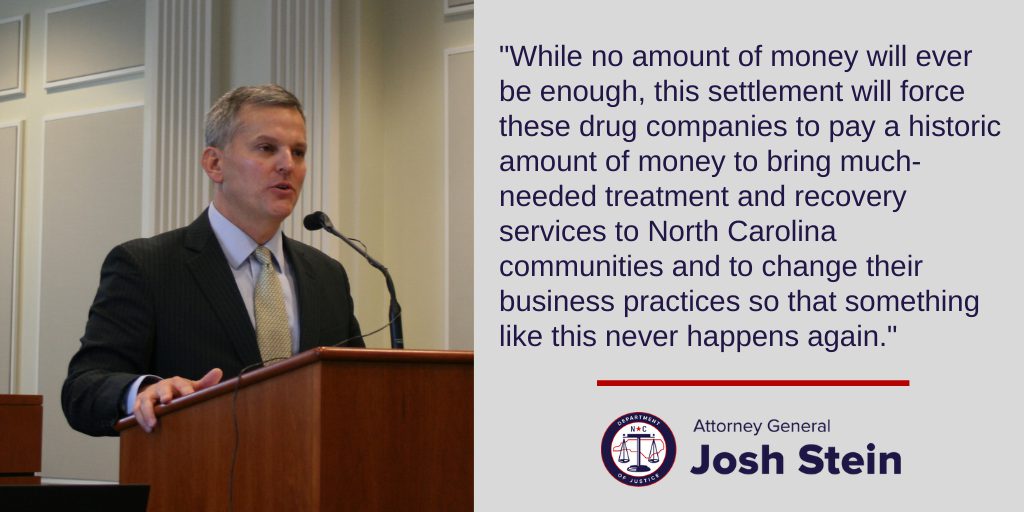 (RALEIGH) Attorney General Josh Stein today announced a historic $26 billion agreement that will help bring desperately needed relief to people across the country who are struggling with opioid addiction. The agreement includes Cardinal, McKesson, and AmerisourceBergen – the nation’s three major pharmaceutical distributors – and Johnson & Johnson, which manufactured and marketed opioids. The agreement also requires significant industry changes that will help prevent this type of crisis from ever happening again. The agreement would resolve investigations and litigation over the companies’ roles in creating and fueling the opioid epidemic. State negotiations were led by Attorneys General Josh Stein (NC) and Herbert Slatery (TN) and the attorneys general from California, Colorado, Connecticut, Delaware, Florida, Georgia, Louisiana, Massachusetts, New York, Ohio, Pennsylvania, and Texas.

“The opioid epidemic has torn families apart and killed thousands of North Carolinians,” said Attorney General Josh Stein. “Families across our state have shared with me their heart-wrenching stories about their loved ones who are struggling with the horrible disease of addiction or who overdosed and died. It has been my genuine honor on their behalf to lead these negotiations to hold accountable the companies that helped to create and fuel this crisis. While no amount of money will ever be enough, this settlement will force these drug companies to pay a historic amount of money to bring much-needed treatment and recovery services to North Carolina communities and to change their business practices so that something like this never happens again.”

This settlement comes as a result of investigations by state attorneys general into whether the three distributors fulfilled their legal duty to refuse to ship opioids to pharmacies that submitted suspicious drug orders and whether Johnson & Johnson misled patients and doctors about the addictive nature of opioid drugs.

A previous version of this deal in principle was announced in 2019 and included the opioid manufacturer Teva. Negotiations with Teva are ongoing and are no longer part of this agreement. Today’s deal comes on the heels of previously announced opioid settlements with Purdue Pharma, McKinsey Consulting, Mallinckrodt, and Insys Therauputics. Combined these earlier matters will generate approximately $6.7 billion for opioid abatement, which in addition to today’s agreement brings the collective opioid efforts of the attorneys general to $32.7 billion. These opioid cases represent the largest attorney general multi-state enforcement actions in history other than the tobacco master settlement agreement.

A copy of the full distributor agreement is available here.

A copy of the Johnson & Johnson agreement is available here.