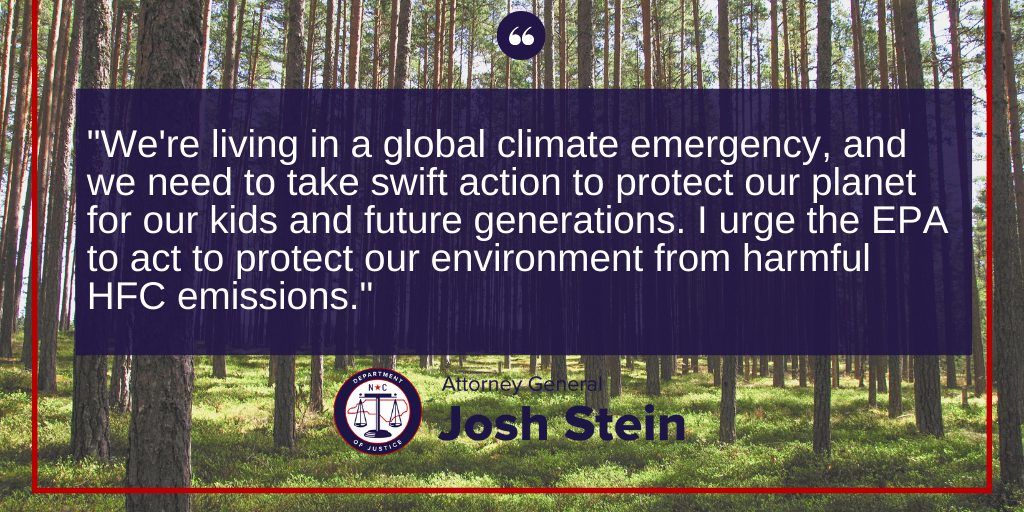 (RALEIGH) Attorney General Josh Stein today called on the Environmental Protection Agency (EPA) to adopt stricter regulations to curb emissions from hydrofluorocarbons (HFCs), which are the fastest-growing source of greenhouse gas emissions and thousands of times more potent that carbon dioxide in their ability to trap heat.

“We’re living in a global climate emergency, and we need to take swift action to protect our planet for our kids and future generations,” said Attorney General Josh Stein. “I urge the EPA to act to protect our environment from harmful HFC emissions.”

HFCs are widely used in residential, mobile, and commercial cooling systems – such as air conditioning and refrigeration – as well as in building foams and aerosols. Once deemed a safer alternative for the environment than substances that destroy the ozone layer, HFCs were later understood to pose huge environmental risks as potent greenhouse gases with a large potential to cause global warming. Because of this high potential, their increasing share of emissions, and their relatively short lifespan in the atmosphere, reducing consumption and production of HFCs quickly is important to addressing climate change.

In 2015, the EPA issued regulations that would have required HFCs to be replaced with safer chemicals. As a result, many U.S. businesses have already invested in technologies to manufacture alternatives. However, these regulations were partially struck down in 2017. In December 2020, Congress passed the American Innovation and Manufacturing Act, which requires the EPA to facilitate the phase-down of HFC use and production by 85 percent over the next 15 years and gives the EPA broad authority to take action to regulate HFC emissions.

In their petition, Attorney General Stein and 12 other attorneys general argue that it’s critical that the EPA exercise its authority to regulate HFCs to the fullest extent and take bold action to cut emissions of this harmful super pollutant to address climate change and meet President Biden’s climate goals. They’re asking the EPA to create regulations to prohibit HFCs, reinstate its 2015 regulations, and reinstate other requirements to help cut HFC emissions that were rescinded under the Trump administration.

A copy of the petition is available here.