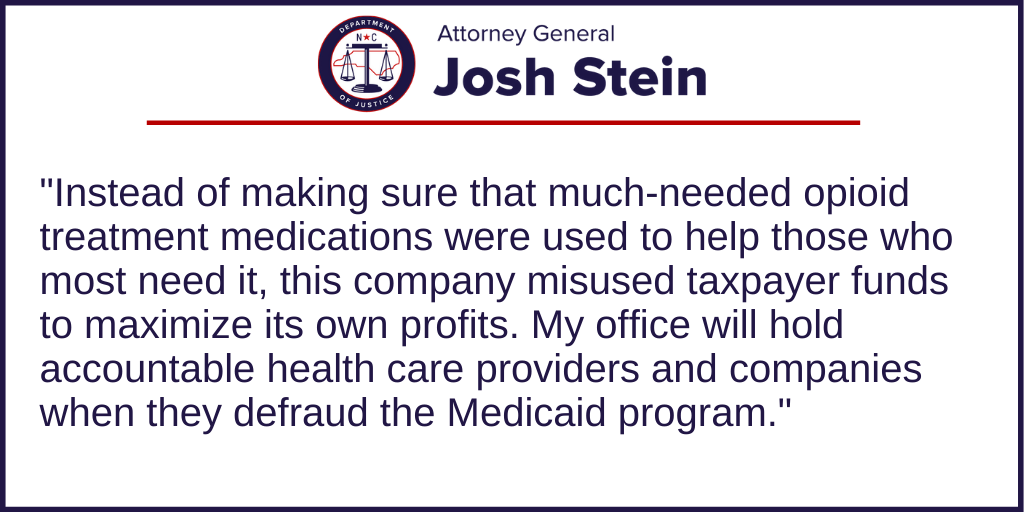 “Instead of making sure that much-needed opioid treatment medications were used to help those who most need it, this company misused taxpayer funds to maximize its own profits,” said Attorney General Josh Stein. “My office will hold accountable health care providers and companies when they defraud the Medicaid program.”

Suboxone is approved to help people struggling with opioid addiction avoid or reduce withdrawal symptoms as they go through treatment. Suboxone and its active ingredient, buprenorphine, are powerful and addictive opioids.

The settlement resolves allegations that from 2010 to 2015, Indivior promoted the sale and use of Suboxone to physicians for prescriptions that lacked a legitimate medical purpose and were for unsafe and ineffective uses, promoted the sale or use of Suboxone Sublingual Film based on false and misleading claims, and submitted a petition to the FDA that fraudulently took steps to delay the entry of generic competition for various forms of Suboxone.

In a federal criminal case, Indivior Solutions, a subsidiary of Indivior, pleaded guilty to one count of felony information and admitted to making false statements to promote Suboxone Film to the Massachusetts Medicaid program and was sentenced to pay $289 million in criminal fines, forfeiture, and restitution. In addition to the criminal and civil resolutions, Indivior executed a five-year Corporate Integrity Agreement with the U.S. Department of Health and Human Services-Office of Inspector General that will require the company to implement numerous accountability and auditing provisions. Various officials at Indivior and its subsidiaries have also pleaded guilty in relation to this conduct.