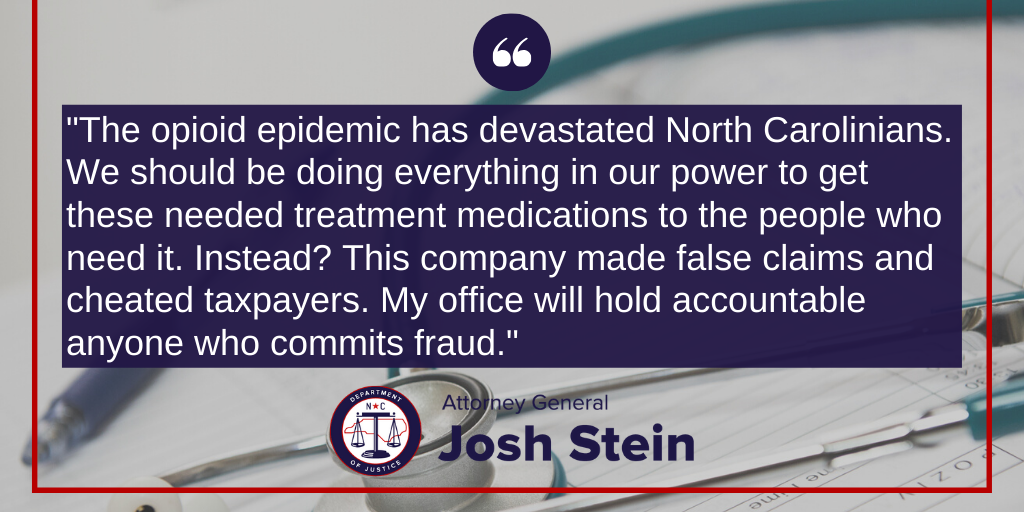 (RALEIGH) Attorney General Josh Stein today announced a $700 million settlement with UK-based pharmaceutical distributor Reckitt Benckiser Group, $14,840,054.06 of which will go to North Carolina. The settlement resolves allegations that the company and its U.S. subsidiary Indivior Inc. improperly marketed and promoted the drug Suboxone, misusing Medicaid funds in the process. Suboxone, whose active ingredient is buprenorphine, is a drug approved to help people undergoing treatment to recover from opioid addiction avoid or reduce withdrawal symptoms.

“The opioid epidemic has devastated North Carolinians,” said Attorney General Josh Stein. “We should be doing everything in our power to get these needed treatment medications to the people who need it. Instead? This company made false claims and cheated taxpayers. My office will hold accountable anyone who commits fraud.”

The settlement, with all 50 states, the District of Columbia, and Puerto Rico, resolves claims against Reckitt in six federal lawsuits over a series of allegations about Reckitt and Indivior’s actions from 2010 through 2014. These allegations include that the companies:

Reckitt has entered into a separate non-prosecution agreement to resolve its potential criminal liability stemming from conduct alleged in the indictment of Indivior.