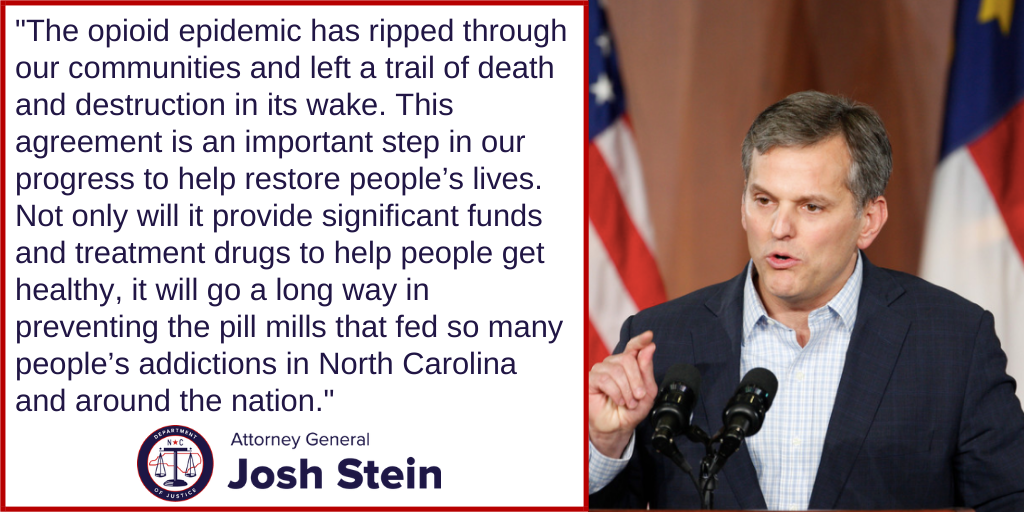 (RALEIGH) Attorney General Josh Stein today announced that he, along with Attorney General Herbert Slatery (TN), Attorney General Josh Shapiro (PA), and Attorney General Ken Paxton (TX), has reached a $48 billion settlement framework with Cardinal Health, McKesson, AmersourceBergen, Johnson & Johnson, and Teva over their role in the opioid epidemic. The attorneys general are optimistic that other states will join this agreement in the coming days and weeks. The deal includes $22 billion in cash and $26 billion in medication assisted treatment drugs and their distribution over 10 years.

“The opioid epidemic has ripped through our communities and left a trail of death and destruction in its wake,” said Attorney General Josh Stein. “This agreement is an important step in our progress to help restore people’s lives. Not only will it provide significant funds and treatment drugs to help people get healthy, it will go a long way in preventing the pill mills that fed so many people’s addictions in North Carolina and around the nation.”

In addition to $22 billion in cash and $26 billion in generic suboxone product, product distribution, and data-tracking measures, the three major distributors have also agreed to change their policies to prevent over-distribution in the future.

Specifically, McKesson, Cardinal and Amerisource Bergen have agreed to take aggressive internal action, including conducting data aggregation and review to prevent over distribution, conducting due diligence on pharmacies to prevent pill mills, and training delivery drivers to identify and report potential pill mills. McKesson, Cardinal, and AmerisourceBergen have also agreed to work to develop an independent clearinghouse to aggregate data and identify where drugs are being sent and at what rate. Johnson & Johnson and Teva, two manufacturers of opioids, have agreed to abstain from marketing any opioid products.

The framework announced today is an agreement in principle. Each state and its local governments will receive a share of the $22 billion in cash to take action to abate the crisis, including providing addiction treatment, community paramedic services, and telehealth treatment, among other activities. The distribution of cash will be based on a formula that will be finalized.

The three distributors, McKesson, AmerisourceBergen, and Cardinal, are agreeing to this settlement after attorneys general launched an investigation that sought information related to whether or not the companies fulfilled their legal duty to raise red flags about pharmacies’ suspicious drug orders.

The two manufacturers, Johnson & Johnson and Teva, are agreeing to this settlement after attorneys general launched an investigation centered on the possibility that patients and doctors were misled about the addictive nature of opioid drugs.

For more information about this agreement, please click here. For an audio recording of today’s call with the attorneys general about the details of this framework, download here.