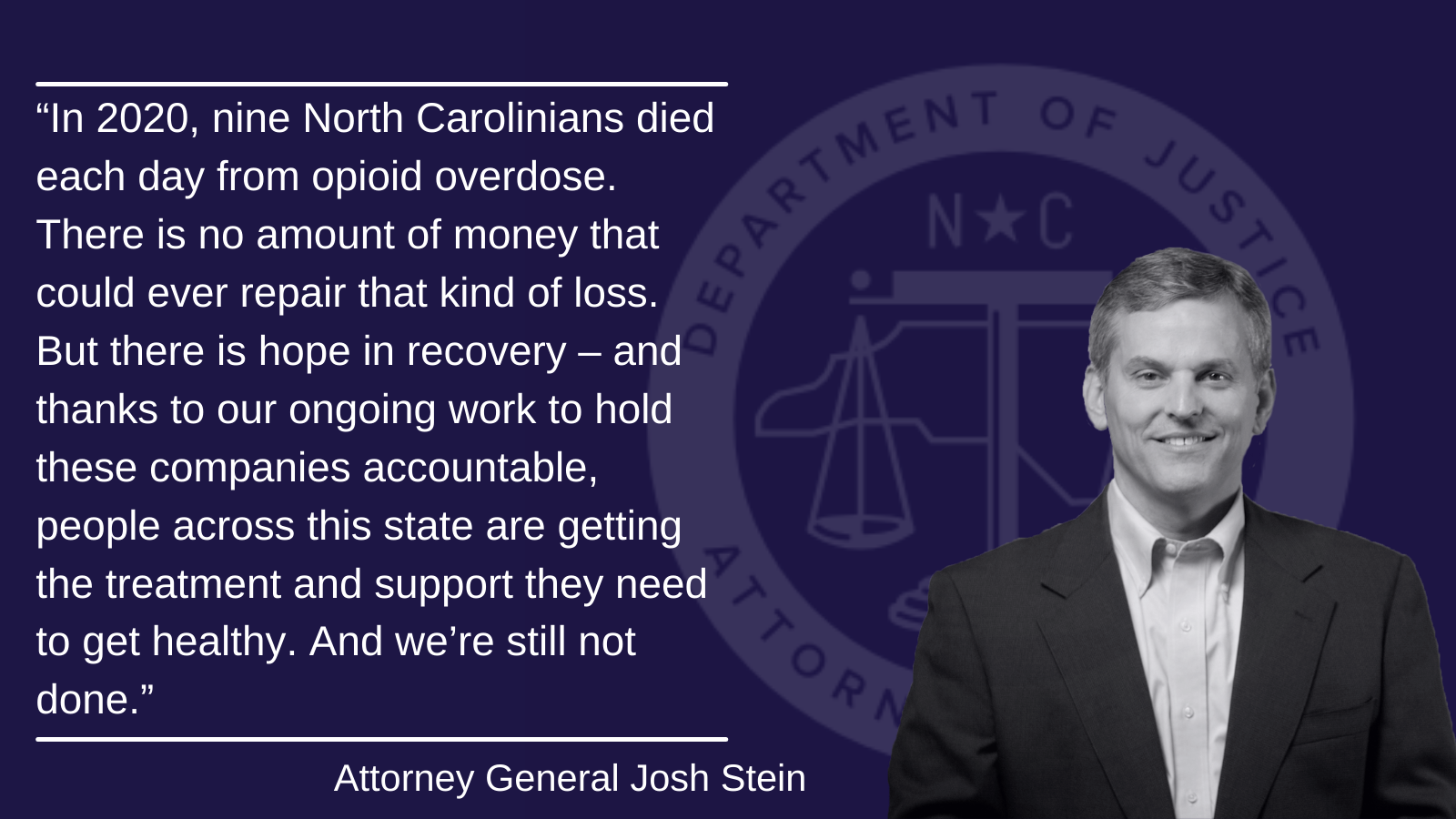 (RALEIGH) Attorney General Josh Stein and a bipartisan group of attorneys general today announced a second agreement in principle this week with a drug manufacturer to address the opioid crisis. The proposed settlement would require former opioid maker Allergan to pay up to $2.37 billion to participating states and local governments. This is on the heels of the related $4.25 billion proposed settlement with Teva announced Tuesday, bringing this week’s total to $6.6 billion.

“In 2020, nine North Carolinians died each day from an overdose,” said Attorney General Josh Stein. “There is no amount of money that could ever repair that kind of loss. But there is hope in recovery – and thanks to our ongoing work to hold these drug companies accountable, people across this state are getting the treatment and support they need to get healthy. And we’re still not done.”

When finalized, the Allergan settlement, together with the Teva Pharmaceuticals settlement announced this week, would provide as much as $6.6 billion nationwide. Abbvie, which acquired Allergan in 2020, disclosed the agreement in its earnings announcement this morning.

Both settlements remain contingent on resolution of key issues, including details regarding the settlement structure, which is expected to build on the framework developed in prior nationwide opioid settlements. The parties are also negotiating terms requiring business practice changes and transparency.

Ireland-based Allergan formerly made Norco- and Kadian-branded and generic opioids. The company sold its generics portfolio, including opioid products, to Teva in 2016. Teva and the AGs announced Tuesday that they had reached an agreement in principle to provide up to $4.25 billion to address its part in the opioid crisis. The Teva agreement in principle is contingent, in part, on Allergan reaching its own settlement with the states.

The coalition of states alleged that Allergan:

The $2.37 billion figure includes money that Allergan has already agreed to pay under settlements with individual states.

These settlements, in combination with the settlements with the three drug distributors, Mallinckrodt, and Johnson and Johnson, would bring the total resources secured to address the opioid crisis to more than $34 billion.

The negotiations are being led by North Carolina, Iowa, California, Illinois, Maryland, Massachusetts, New York, Pennsylvania, Tennessee, Texas, Vermont, Virginia, and Wisconsin. While New York was among the 13 states integral to negotiating this settlement, New York settled separately with Allergan in December 2021 as a part of its trial.