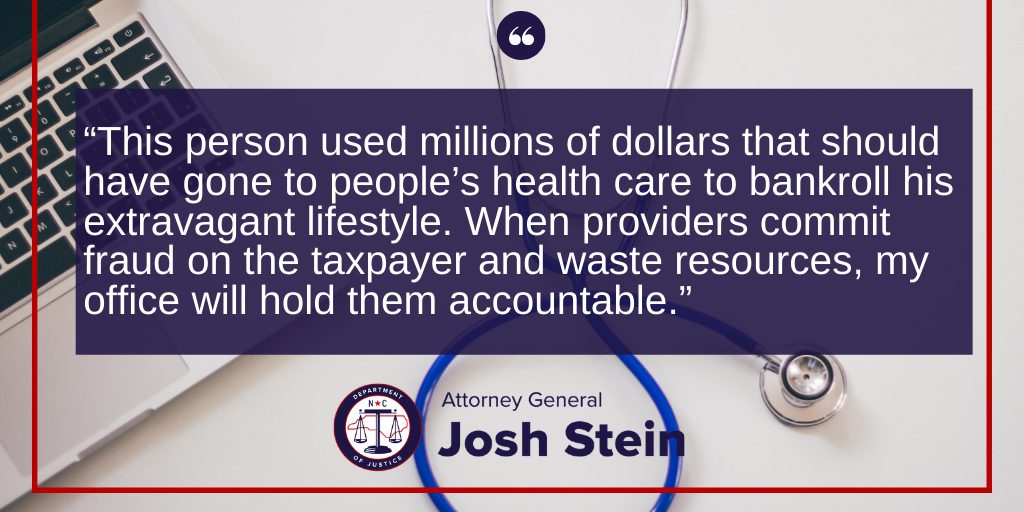 (RALEIGH) Attorney General Josh Stein announced that Timothy Mark Harron of Las Vegas was sentenced to 144 months in federal prison and ordered to pay $4,321,590.39 in restitution to the North Carolina Medicaid program after pleading guilty to conspiracy to commit health care fraud, wire fraud, aggravated identity theft, and conspiracy to commit money laundering. Harron and his codefendant must also forfeit items including more than $13 million in cash, a private jet, a sports car, a pickup truck, designer jewelry and luxury items, and real estate property in North Carolina.

“This person used millions of dollars that should have gone to people’s health care to bankroll his extravagant lifestyle,” said Attorney General Josh Stein. “When providers commit fraud on the taxpayer and waste resources, my office will hold them accountable.”

Harron and his wife Latisha Harron pleaded guilty to billing the government for fictitious home health services through their company Agape Healthcare Systems, Inc., an enrolled Medicaid provider in Roanoke Rapids. To enroll Agape as a Medicaid provider, Latisha Harron fraudulently concealed her prior felony conviction for identity theft. Harron admitted that he and his wife carried out the fraud by exploiting an eligibility tool that was entrusted only to NC Medicaid providers. They searched public sources to find information about North Carolinians who had recently passed away, then used the Medicaid tool to check whether the deceased person was enrolled in Medicaid. If they were, the Harrons would back-bill fictitious home health services to Medicaid. They fraudulently billed the Medicaid program for more than $10 million between 2017 and 2019. The Harrons also laundered the proceeds of the fraud into luxury items including a private jet, hundreds of thousands in jewelry and clothing, gym equipment, and properties. They also continued to bill the program for North Carolina Medicaid recipients after they moved out of the state.

Latisha Harron was previously sentenced in May 2021. The investigation and prosecution of this case was completed by the U.S. Attorney’s Office for the Eastern District of North Carolina, the Federal Bureau of Investigation, the United States Department of Health and Human Services Office of the Inspector General, the Internal Revenue Service Criminal Investigation, and the North Carolina Attorney General’s Medicaid Investigations Division.