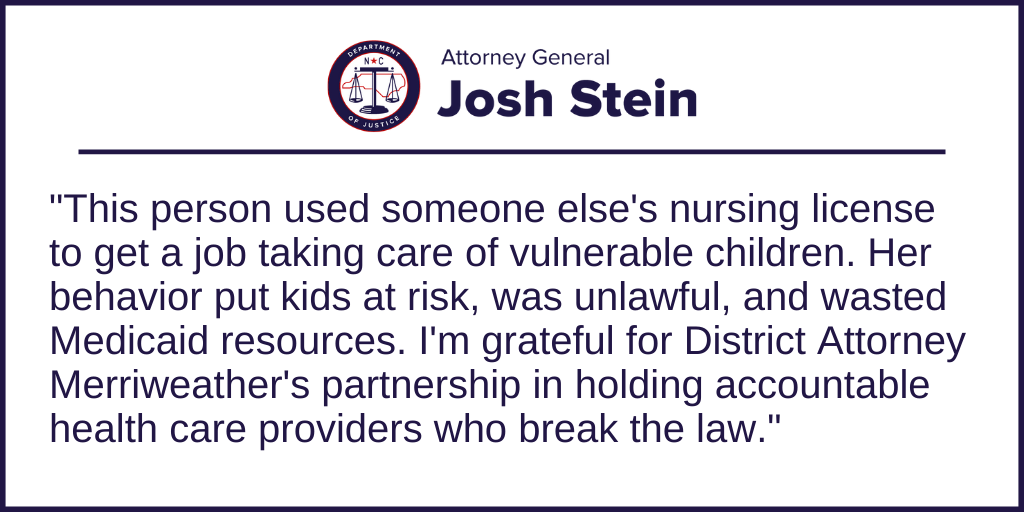 (RALEIGH) Attorney General Josh Stein announced that Brittany White of Charlotte pleaded guilty to medical assistance provider fraud in Mecklenburg County Superior Court. She was sentenced to four to 14 months in prison and ordered to pay $23,401.05 in restitution. The active sentence was suspended and she was placed on 36 months of unsupervised probation.

White was a licensed practical nurse in Tennessee and continued to work in North Carolina under an established agreement between the two states. However, she allowed her out-of-state license to lapse in that time and then illegally used the license number of a licensed Tennessee nurse who had a similar name to obtain employment in North Carolina as a nurse at Continuum Pediatric Nursing Inc. (CPN). CPN hired White based on her false representation that she was an actively licensed nurse.

From May 4, 2018, to February 8, 2019, White cared for three pediatric patients at CPN despite not being licensed and was paid $23,401.05 for these services. CPN submitted claims to Medicaid for reimbursement for White’s nursing services. CPN has already reimbursed Medicaid, and the court ordered White to pay restitution to CPN.

This conviction was obtained by the Attorney General’s Medicaid Investigations Division and the Mecklenburg County District Attorney’s Office.