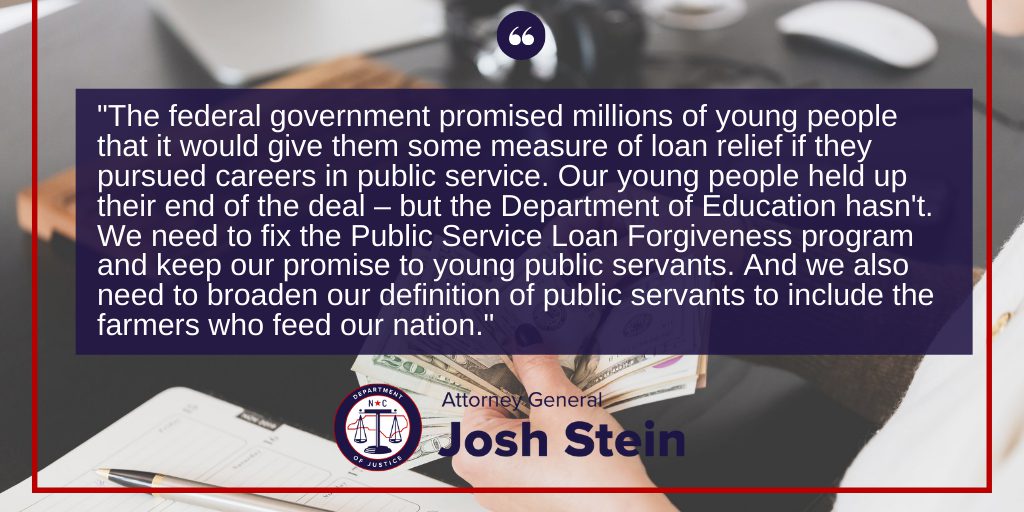 “The federal government promised millions of young people that it would give them some measure of loan relief if they pursued careers in public service,” said Attorney General Josh Stein. “Our young people held up their end of the deal – but the Department of Education hasn’t. We need to fix the Public Service Loan Forgiveness program and keep our promise to young public servants. And we also need to broaden our definition of public servants to include the farmers who feed our nation.”

The PSLF program was created in 2007 and forgives the remaining loan balance for a Federal Direct Loan borrower who works for 10 years in a public service job while making loan payments relative to their income. But since borrowers first became eligible for relief in 2017, the ED has denied almost all PSLF applications and left millions of public servants in the lurch. These teachers, nurses, public interest attorneys, social workers, first responders, servicemembers, and others incurred significant student loan debt to gain the skills necessary to serve our communities and were promised that a portion of their loans would eventually be forgiven. In today’s letter, a coalition of 22 attorneys general commends ED’s commitment to improving the PSLF program and asks the department to act quickly to fix the failures in the program’s administration.

In addition to this letter, Attorney General Stein is also asking for additional updates to the PSLF program. Earlier this month, he and Agriculture Commissioner Steve Troxler asked U.S. Education Secretary Miguel Cardona to make farmers eligible for loan forgiveness under the program.  Adding farmers to the list of eligible public servants would help alleviate farmer shortages, allow more young people to pursue careers in farming and agriculture, and secure our future food supply.

More than 1.27 million North Carolinians have a federal student loan. The average borrower owes more than $35,300. Student borrowers have trouble paying their loans, a problem that is even more acute in public service careers where wages struggle to keep up.

The attorneys general are asking the ED to: