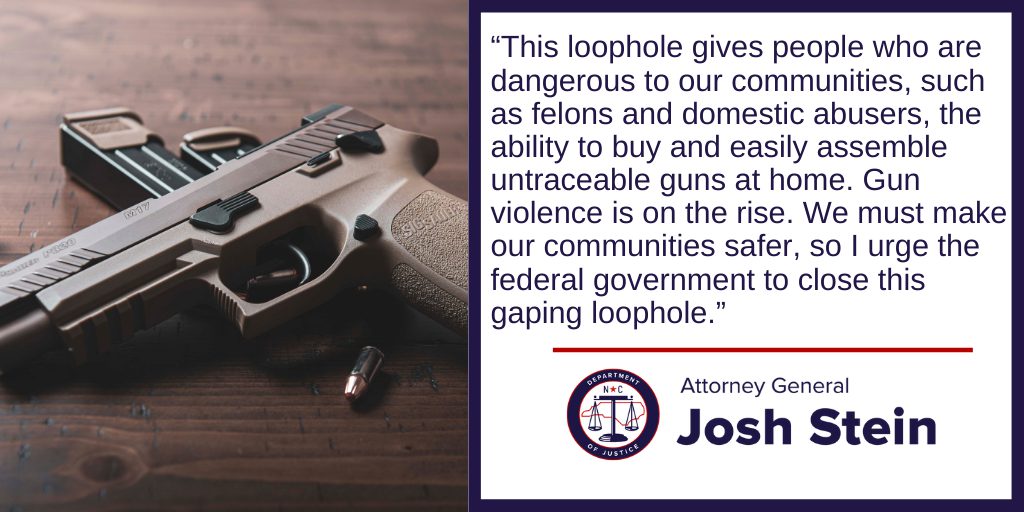 (RALEIGH) Attorney General Josh Stein today encouraged the Bureau of Alcohol, Tobacco, Firearms, and Explosives (ATF) to make clear that ghost guns are firearms under federal law. By doing so, the ATF would dramatically reduce the availability of these unserialized, untraceable guns.

“This loophole gives people who are dangerous to our communities, such as felons and domestic abusers, the ability to buy and easily assemble untraceable guns at home,” said Attorney General Josh Stein. “Gun violence is on the rise. We must make our communities safer, so I urge the federal government to close this gaping loophole.”

The proposed rule, Definition of ‘Frame or Receiver’ and Identification of Firearms, updates the ATF’s interpretations of “firearm” and “frame or receiver” as used in the Gun Control Act of 1968 to clarify that weapon kits and incomplete weapon parts, both of which can be easily converted into functioning guns, are covered by the Act.

The ATF’s current regulations effectively allow people, including people prohibited from owning a gun under federal law, to obtain a weapon without undergoing any background check. In their letter to U.S. Attorney General Merrick Garland, the coalition asserted that this failure to accurately regulate firearms has provided an opportunity for gun dealers to sell unregulated, dangerous firearms.