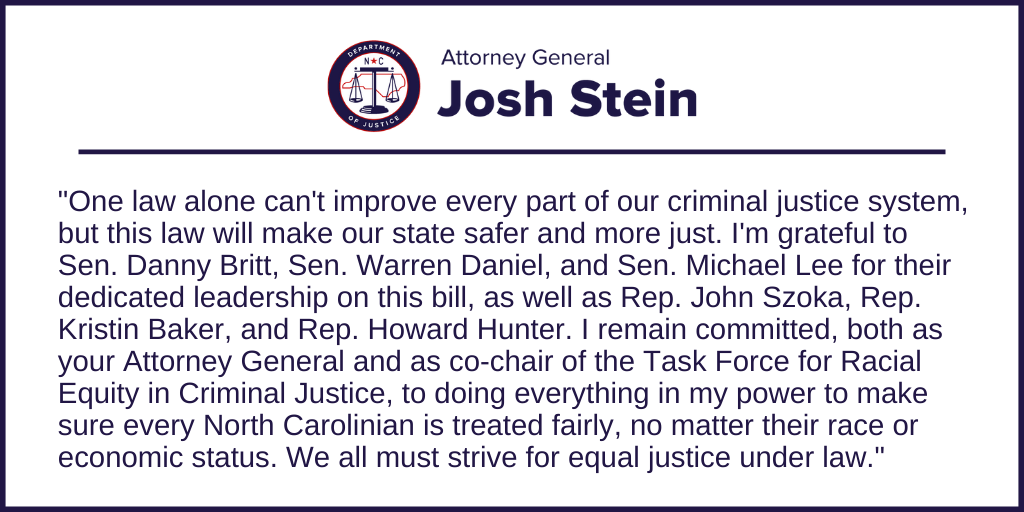 (RALEIGH) Attorney General Josh Stein today released the following statement after the Criminal Justice Reform Bill (SB300) passed the North Carolina Senate. This legislation passed in the House earlier this month. The bill will now go to Gov. Roy Cooper for his signature.

“One law alone can’t improve every part of our criminal justice system, but this law will make our state safer and more just. I’m grateful to Sen. Danny Britt, Sen. Warren Daniel, and Sen. Michael Lee for their dedicated leadership on this bill, as well as Rep. John Szoka, Rep. Kristin Baker, and Rep. Howard Hunter. I remain committed, both as your Attorney General and as co-chair of the Task Force for Racial Equity in Criminal Justice, to doing everything in my power to make sure every North Carolinian is treated fairly, no matter their race or economic status. We all must strive for equal justice under law.

“Protecting our communities and treating people fairly must be the guiding principles of North Carolina’s criminal justice system. This bill marks significant progress for North Carolina in both regards. The legislation cements into law a number of recommendations made by Governor Cooper’s Task Force for Racial Equity in Criminal Justice, which I am honored to co-chair with Justice Anita Earls.

“This legislation will help us recruit talented and diverse law enforcement officers and ensure that they have the training they need to be successful and build trust with the communities they serve. The bill requires early intervention mechanisms to help officers do their jobs properly, and when they cannot, it helps agencies address it more quickly. The bill imposes a duty on officers to intervene when a fellow officer is using excessive force and then report it to a supervisor. It also furthers independent investigations of police-involved shootings. This bill will also limit local laws that criminalize poverty and reduce the burden to taxpayers by requiring a first appearance in court within 72 hours of a person being arrested. Together, these measures represent significant progress.”