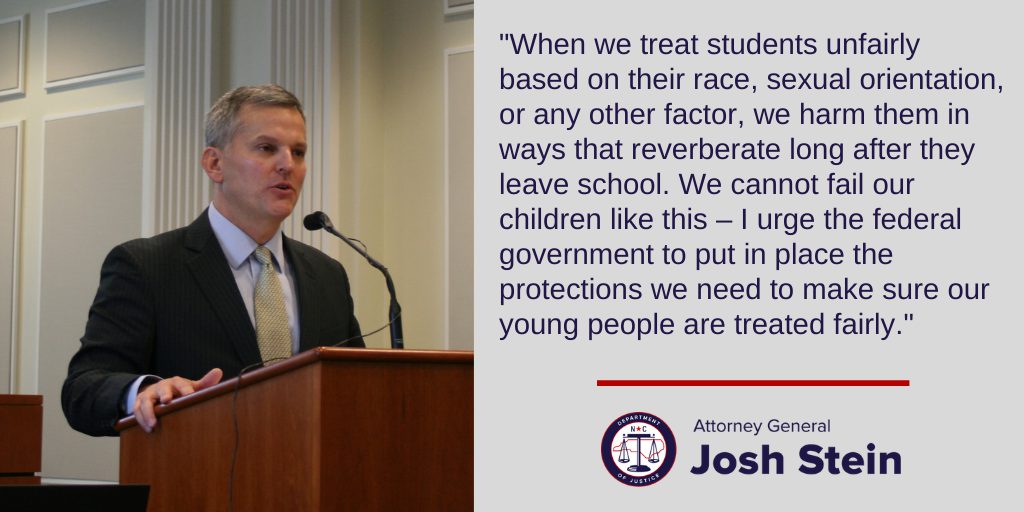 “When we treat students unfairly based on their race, sexual orientation, or any other factor, we harm them in ways that reverberate long after they leave school,” said Attorney General Josh Stein. “We cannot fail our children like this – I urge the federal government to put in place the protections we need to make sure our young people are treated fairly.”

In 2014, the Department of Education (DOE) and the Department of Justice (DOJ) jointly issued a guidance package that explained that federal law prohibits school discipline that intentionally discriminates or unintentionally results in a disparate impact based on a student’s race, color, or national origin. Four years later, DOE and DOJ withdrew the guidance. This coalition of attorneys general is asking the departments to address this critical issue affecting some of our most vulnerable children by reinstating and expanding the 2014 guidance.

In their letter, the coalition points out that exclusionary discipline, or forms of disciplining students that take them away from their standard educational environment, remains prevalent across the country and continues to disproportionally impact students of color. Additionally, students with disabilities and LGBTQ students are also more frequently subjected to exclusionary discipline methods. Because of emerging data on these issues, the attorneys general are also asking DOE and DOJ to expand the guidance to address discrimination in school discipline on sex, sexual orientation, gender identity, and disability.

Data from the Department of Education’s Office of Civil Rights (OCR) 2015-2016 Civil Rights Data Collection (CRDC) and the National Bureau of Economic Research indicates that:

As part of his role as co-chair for the North Carolina Task Force for Racial Equity in Criminal Justice, Attorney General Stein’s letter aligns with the Task Force’s recommendations to revise the role of School Resource Officers and stem the school-to-prison pipeline and rethink juvenile justice. The Task Force recommended solutions including hiring behavioral health professionals in schools and funding school personnel training on mental health, first aid, cultural competence/diversity/inclusion, and developmental disability.