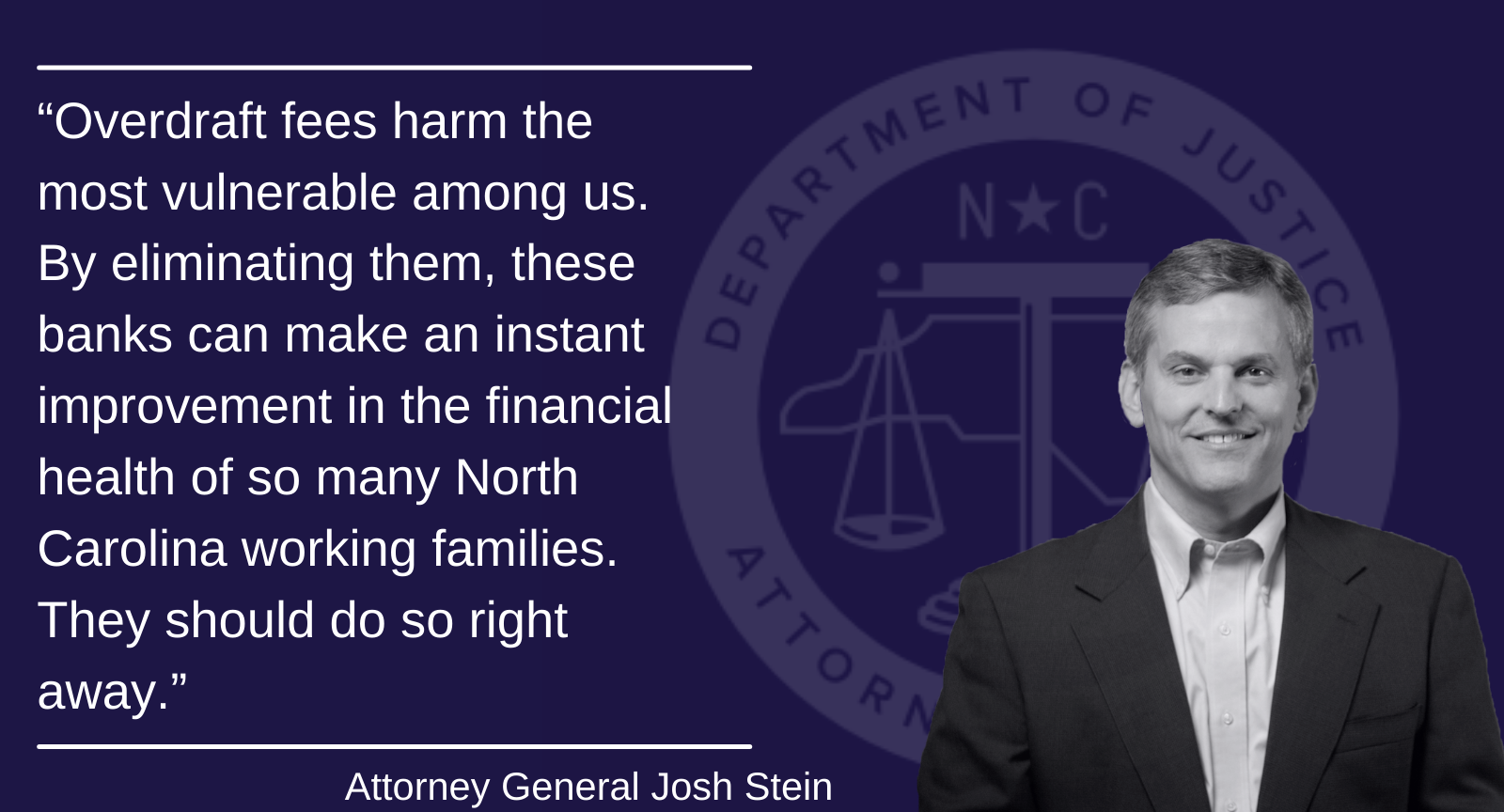 (RALEIGH) Attorney General Josh Stein today called on the CEOs of JPMorgan Chase, U.S. Bank, and Wells Fargo to eliminate all bank account overdraft fees. In a letter to each financial institution, Attorney General Stein urged each bank to eliminate overdraft fees by this summer to create a fairer consumer financial system. Numerous studies have shown that overdraft fees have disproportionately affected vulnerable families by unnecessarily saddling them with additional debts they cannot afford.

“Overdraft fees harm the most vulnerable among us,” said Attorney General Josh Stein. “By eliminating them, these banks can make an instant improvement in the financial health of so many North Carolina working families. They should do so right away.”

Overdraft fees harm millions of people nationwide. In some instances, people can be charged as much as $35 for a purchase of $5 or less. Research indicates that people were charged more than $12.4 billion in overdraft fees in 2020. Black households were nearly two times more likely and Hispanic households were nearly 1.5 times more likely to pay overdraft fees than white households. Another study by the Pew Charitable Trust noted that more than 90 percent of such fees are paid by a small subset of people who generally paid three or more such fees per year while earning less than $50,000. The reports found that communities of color were disproportionately impacted by these fees. The fees can have devastating financial consequences and, in the worst-case scenarios, result in people losing access to banking services.

Despite this well-known fallout from overdraft practices, the banks continue to charge these fees because they want the revenue. According to a recent study published by the Consumer Financial Protection Bureau (CFPB), JPMorgan Chase, U.S. Bank, and Wells Fargo are among the top five U.S. banks in total assets. If these banks eliminated overdraft fees, they would drastically improve access to fairer, fee-free banking options for millions of North Carolinians and people across the country. Earlier this year Citibank, announced that it would eliminate overdraft fees, which followed a similar announcement late last year by Capital One. Citibank is the largest U.S. bank to take this step.

Attorney General Stein is joined in sending these letters by the attorneys general for California, Connecticut, the District of Columbia, Delaware, Hawaii (along with the Hawaii Office of Consumer Protection), Illinois, Iowa, Maryland, Massachusetts, Michigan, Minnesota, Nevada, New Jersey, Oregon, Pennsylvania and Washington.

A copy of the letters is available here.