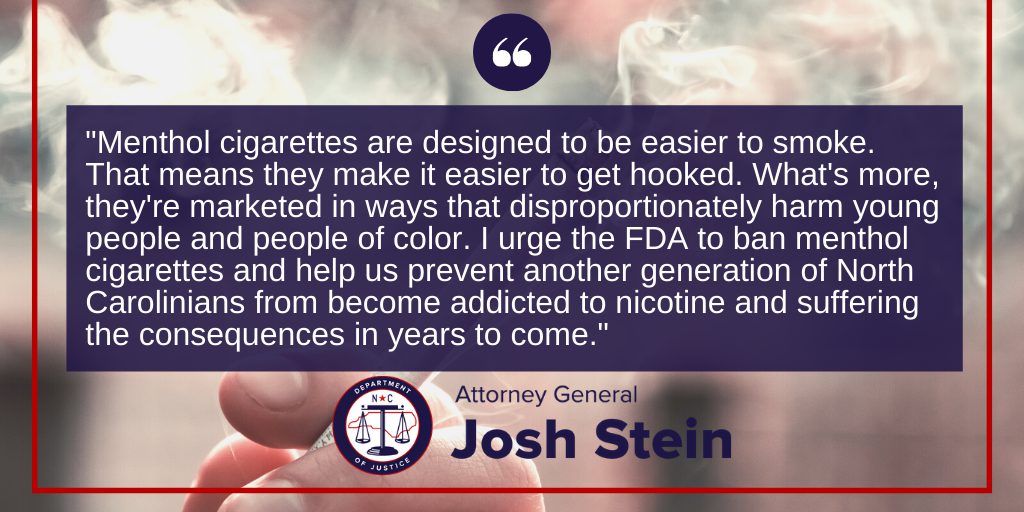 “Menthol cigarettes are designed to be easier to smoke,” said Attorney General Josh Stein. “That means they make it easier to get hooked. What’s more, they’re marketed in ways that disproportionately harm young people and people of color. I urge the FDA to ban menthol cigarettes and help us prevent another generation of North Carolinians from become addicted to nicotine and suffering the consequences in years to come.”

In a letter to the FDA, Attorney General Stein and a bipartisan coalition of 23 attorneys general argue that such a prohibition would save thousands of lives and should be implemented immediately. Despite the overall decline in non-menthol smoking, the prevalence of menthol smoking has remained constant in recent years and disproportionately impacts youth and communities of color. The attorneys general state that menthol cigarettes remain a major barrier to smoking cessation and the reduction of smoking-related health conditions.

The attorneys general highlight the FDA’s own data showing the addictiveness of menthol cigarettes. Research into the health impacts of menthol in cigarettes conducted by the FDA and its Tobacco Products Scientific Advisory Committee (TPSAC) determined menthol cigarettes were associated with increased smoking initiation by youth and young adults, greater likelihood of progression to regular smoking, reduced success in smoking cessation, and greater addiction and nicotine dependency among smokers. Menthol in cigarettes disguises their harsh flavor, making it attractive for beginners who experiment with cigarettes and ultimately become addicted. The sensory effects and flavor of menthol can make cigarettes more addictive and menthol smokers are less likely to successfully quit than non-menthol smokers.

Attorney General Stein has been leading the fight to prevent the next generation from becoming addicted to nicotine, including fighting the teen vaping epidemic. He filed the first state lawsuit against e-cigarette manufacturer Juul in May 2019 for aggressively marketing their products to young people and misrepresenting the dangers of the nicotine in e-cigarettes. He also filed lawsuits against eight additional e-cigarette companies in August 2019 for aggressively targeting children and lax age verification processes. The courts barred most of these companies from selling any e-cigarette products in North Carolina for the duration of the lawsuits.