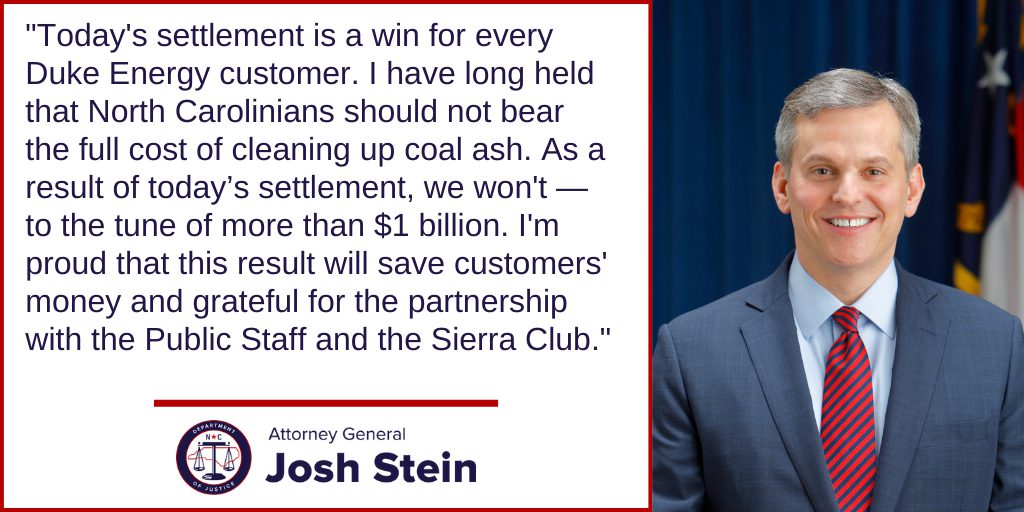 (RALEIGH) Attorney General Josh Stein today announced that he, along with the Public Staff of the North Carolina Utilities Commission and the Sierra Club, has entered into a settlement with Duke Energy about paying for coal ash cleanup that will save North Carolina electricity customers more than $1 billion on their utility bills over the next 10 years. This settlement comes as the result of a 2017 challenge the Attorney General, the Public Staff, and the Sierra Club made to a Utilities Commission order that granted Duke Energy’s request that Duke Energy’s customers bear all the cost of cleaning up coal ash beyond a one-time $100 million environmental penalty the Utilities Commission assessed on Duke Energy. Attorney General Stein, the Public Staff, and the Sierra Club appealed that decision to the North Carolina Supreme Court, which issued its decision in December. Today’s settlement applies to cleanup costs incurred from 2015 through 2030.

“Today’s settlement is a win for every Duke Energy customer,” said Attorney General Josh Stein. “I have long held that North Carolinians should not bear the full cost of cleaning up coal ash. As a result of today’s settlement, we won’t — to the tune of more than $1 billion. I’m proud that this result will save customers’ money and grateful for the partnership with the Public Staff and the Sierra Club.”

“Just as with last year’s historic agreement for Duke to finally clean up all of its toxic coal ash in North Carolina, today’s settlement shows that sustained and determined grassroots and legal pressure can move even a monopoly corporation to do the right thing,” said Dave Rogers, Southeast deputy regional campaign director for the Sierra Club’s Beyond Coal campaign. “This agreement means Duke will pay for a portion of the coal ash clean up, lifting a burden of more than $1 billion off of families and businesses who would have otherwise been forced to pay. Now, all that’s left is for Duke to retire its remaining coal burning plants and help communities transition to the clean energy future they demand and deserve.”

In total, the settlement is expected to save North Carolina customers more than $1.1 billion between now and 2030. This number is based on the net present value of savings for retail and wholesale customers; the precise amount saved will depend on interest rates and the ultimate amount spent on coal ash cleanup. Today’s settlement applies to the costs in the 2017 rate case, the 2019 rate case, and future rate cases.

Today’s settlement relates only to payment of coal ash cleanup costs. It does not change the work that Duke Energy is committed to perform to clean up coal ash under its December 2019 settlement with the Department of Environmental Quality (represented by the Attorney General’s Office), the Sierra Club, and other community groups. The 2019 settlement secures the excavation of more than 80 million tons of coal ash in North Carolina.