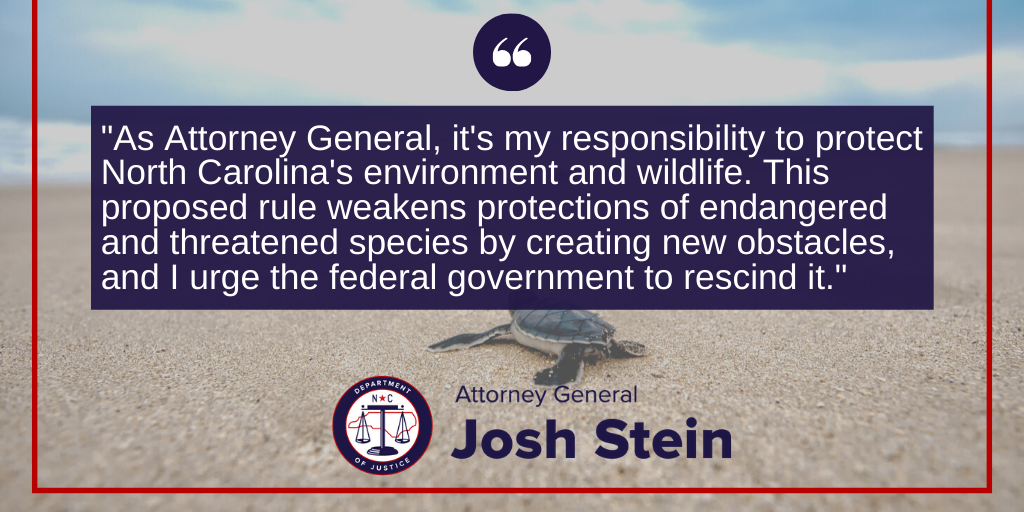 (RALEIGH) Attorney General Josh Stein today challenged a proposed rule under the federal Endangered Species Act (ESA) that would significantly limit the kinds of habitat that could be protected for threatened species.

“As Attorney General, it’s my responsibility to protect North Carolina’s environment and wildlife,” said Attorney General Josh Stein. “This proposed rule weakens protections of endangered and threatened species by creating new obstacles, and I urge the federal government to rescind it.”

The ESA, enacted in 1973, was intended to reverse the trendline of species extinction and has proven to be one of the nation’s strongest tools for modifying human activities to reduce or avoid environmental damage. By safeguarding North Carolina’s coast and mountain environments, the ESA also protects our state’s coastal and tourist economies. The proposed rule from the U.S. Fish and Wildlife Service and National Marine Fisheries Service would narrowly and unlawfully define the term “habitat” under the ESA, thus limiting government agencies’ ability to designate and protect habitats that are critical for species survival and recovery. The rule change would also restrict restoration efforts and make it harder for plants and wildlife to be protected amid climate change.

In their letter, a coalition of attorneys general urge that the proposed rule should be withdrawn because it is contrary to the ESA’s primary purposes of promoting species survival and recovery and contrary to the statutory definition of “critical habitat”. The attorneys general also argue that the rule is arbitrary and capricious and requires environmental review under the National Environmental Policy Act.