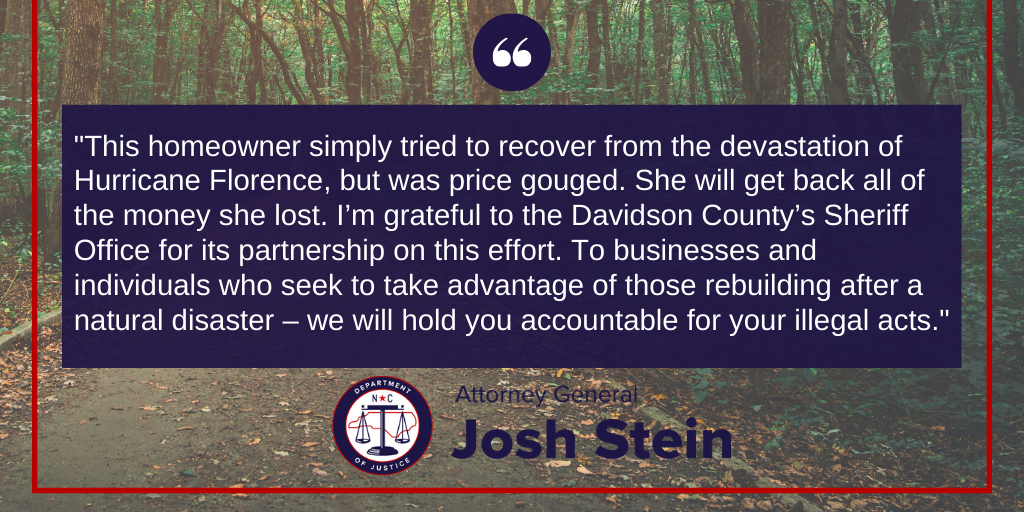 (RALEIGH) Attorney General Josh Stein this week collected $6,000 in restitution from a price gouger that will go back to a Wilmington homeowner who was scammed in the aftermath of Hurricane Florence. In addition, the state of North Carolina received $20,000 plus interest in civil penalties that will go toward funding local schools.

The payment comes after Attorney General Stein won a judgment in April against Alva Wilson Lewis of Lexington, who did business as A1 Tree & Storm Relief, A1 Tree and Storm Damage Relief, and Big Al & Sons Tree Service. Attorney General Stein filed the lawsuit in September 2018 after Lewis’s employee initially provided an estimate of $4,000 to remove three trees for the Wilmington homeowner. The price then jumped to $7,000, and a final invoice charged the customer $12,000. The homeowner ultimately paid $6,000. When Lewis failed to pay the court judgment, Attorney General Stein asked the Davidson County Sheriff to execute on the judgment, and the Sheriff was successful in recovering the money.

“This homeowner simply tried to recover from the devastation of Hurricane Florence, but was price gouged. She will get back all of the money she lost,” said Attorney General Josh Stein. “I’m grateful to the Davidson County’s Sheriff Office for its partnership on this effort. To businesses and individuals who seek to take advantage of those rebuilding after a natural disaster – we will hold you accountable for your illegal acts.”

In addition to the restitution and fines, Lewis is barred from conducting any future tree removal or storm recovery work in North Carolina.

After Hurricanes Michael and Florence devastated North Carolina in 2018, Attorney General Stein brought seven lawsuits against 22 defendants under North Carolina’s price gouging statute. He has obtained eight judgments against 17 defendants, including a $274,000 settlement that was one of the largest price gouging settlements in the department’s history. The Attorney General’s Office has won more than $725,000 in these judgments, including: