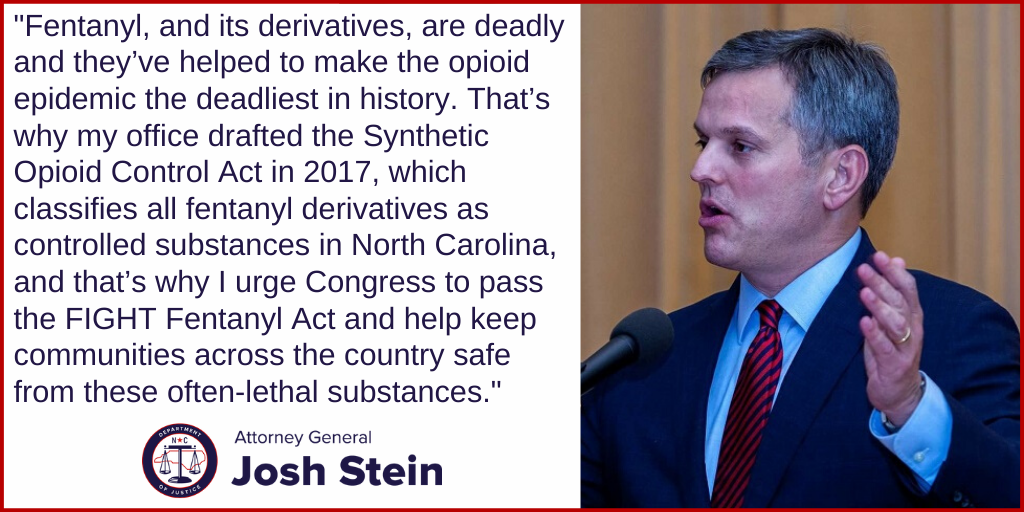 (RALEIGH) Attorney General Josh Stein today joined a bipartisan coalition of all 56 attorneys general in calling for Congress to permanently classify fentanyl-related substances as Schedule I drugs. Schedule I drugs are defined as drugs with no currently accepted medical use and a high potential for abuse.

“Fentanyl, and its derivatives, are deadly and they’ve helped to make the opioid epidemic the deadliest in history,” said Attorney General Josh Stein. “That’s why my office drafted the Synthetic Opioid Control Act in 2017, which classifies all fentanyl derivatives as controlled substances in North Carolina, and that’s why I urge Congress to pass the FIGHT Fentanyl Act and help keep communities across the country safe from these often-lethal substances.”

In their letter, the attorneys general urge Congress to pass S. 2701, the Federal Initiative to Guarantee Health by Targeting (FIGHT) Fentanyl Act, a bipartisan bill introduced by U.S. Senators Rob Portman (R-OH) and Joe Manchin (D-WV). The FIGHT Fentanyl Act will ensure law enforcement agencies and courts retain the tools needed to keep those who traffic in this deadly substance off the streets.

In the most recent data available from the Centers for Disease Control and Prevention, there were 72,000 drug-related deaths in the United States in 2017. Of those deaths, roughly 40 percent involved fentanyl or a fentanyl-related compound.

Attorney General Stein drafted and championed the Synthetic Opioid Control Act, which was signed into law in 2017, and helps law enforcement authorities in North Carolina go after fentanyl traffickers by ensuring that all derivatives of this deadly drug are classified as controlled substances under state law.

Attorney General Stein is joined in sending today’s letter by the Attorneys General of every other state and territory, and the District of Columbia.