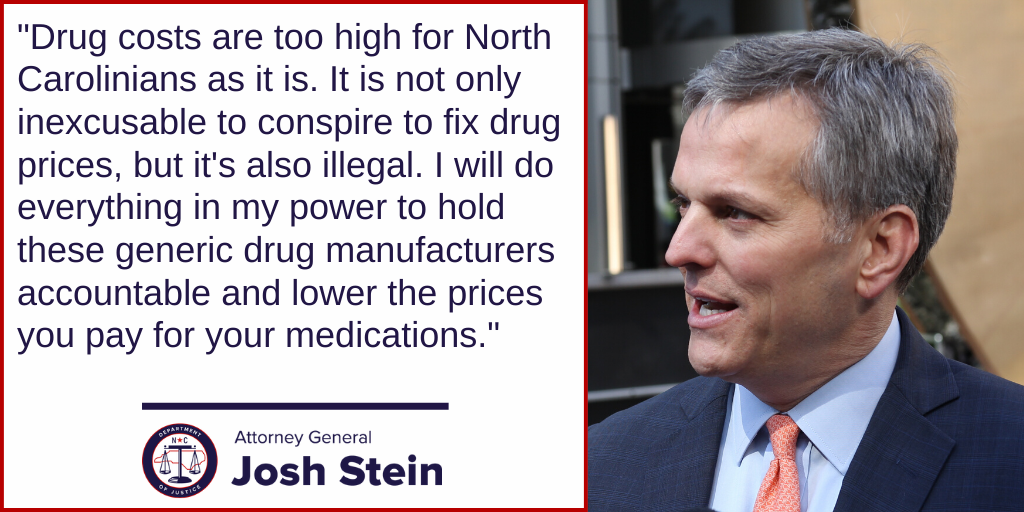 (RALEIGH) Attorney General Josh Stein today filed a lawsuit against 26 generic drug manufacturers and 10 individuals who are senior executives at these drug companies. In his lawsuit, Attorney General Stein alleges a widespread conspiracy to artificially inflate and manipulate prices, reduce competition, and unreasonably restrain trade for 80 topical generic drugs. The lawsuit, the third in an ongoing antitrust multistate investigation, seeks damages, civil penalties, and actions by the court to restore competition to the generic drug market.

“Drug costs are too high for North Carolinians as it is,” said Attorney General Josh Stein. “It is not only inexcusable to conspire to fix drug prices, but it’s also illegal. I will do everything in my power to hold these generic drug manufacturers accountable and lower the prices you pay for your medications.”

The complaint alleges longstanding agreements among manufacturers to ensure a “fair share” of the market for each competitor and to prevent “price erosion” due to competition. Between 2007 and 2014, three generic drug manufacturers—Taro, Perrigo, and Fougera (now Sandoz)—sold nearly two-thirds of all generic topical products dispensed in the United States. The multistate investigation has uncovered comprehensive, direct evidence of unlawful agreements to minimize competition and raise prices on dozens of topical products.

The complaint stems from an ongoing investigation built on evidence from several cooperating witnesses at the core of the conspiracy, a massive document database of more than 20 million documents, and a phone records database containing millions of call detail records and contact information for more than 600 sales and pricing individuals in the generics industry. Among the records obtained by the states is a two-volume notebook containing the contemporaneous notes of one of the states’ cooperators that memorialized his discussions during phone calls with competitors and internal company meetings over a period of several years. Another cooperating witness called the notebooks the “Diary of Collusion.”

The lawsuit names the following defendants:

Drugs listed in the complaint as subject to price-fixing and market allocation agreements: