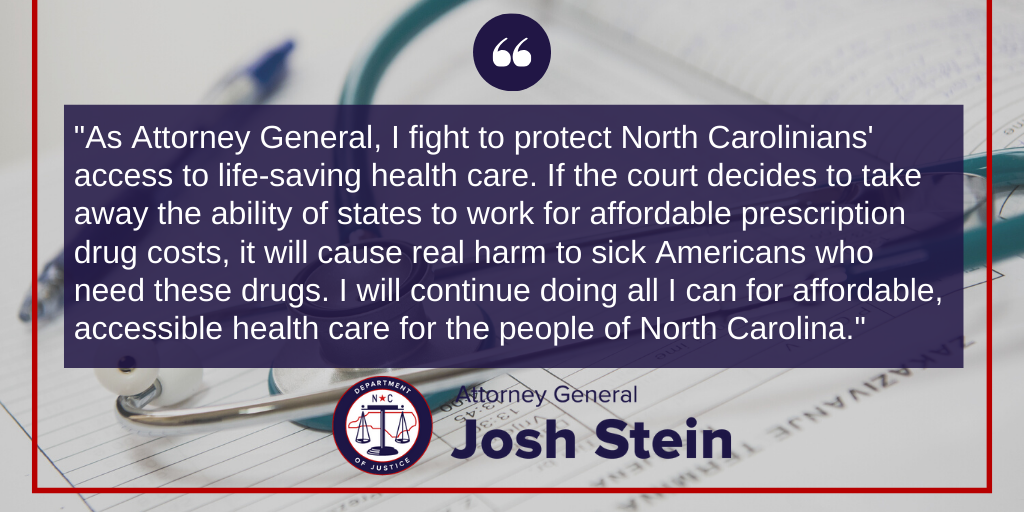 “As Attorney General, I fight to protect North Carolinians’ access to life-saving health care,” said Attorney General Josh Stein. “If the court decides to take away the ability of states to work for affordable prescription drug costs, it will cause real harm to sick Americans who need these drugs. I will continue doing all I can for affordable, accessible health care for the people of North Carolina.”

PBMs act as middlemen between pharmacies, drug manufacturers, health insurance plans, and consumers. Their position gives them some power to influence the market as they develop and maintain prescription drug formularies (lists of medications that are covered by health plans), contract with pharmacies, negotiate discounts with drug manufacturers, and process and pay prescription drug claims.

In Monday’s filing, the coalition of attorneys general argue that state laws regulating pharmacy benefit managers are not restricted by federal law. Regulation is critical to the states’ ability to improve the transparency of prescription drug marketplaces and to protect consumers’ access to affordable prescription drugs, especially those in underserved, rural, and isolated communities. To date, nearly every state has enacted laws that regulate PBMs in some way, including 44 new or amended laws in the last five years. In addition, the attorneys general assert that the regulation of pharmacy benefit managers promotes health care access and affordability. Taking away a state’s ability to protect consumers would create confusion and uncertainty in the market and harm patients.