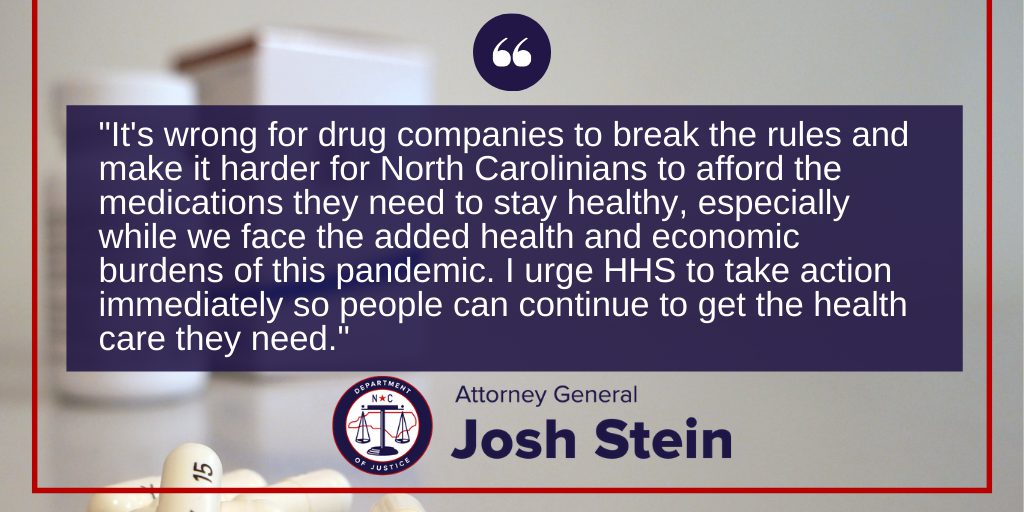 (RALEIGH) Attorney General Josh Stein today urged the U.S. Department of Health and Human Services (HHS) to hold accountable drug manufacturers that are unlawfully refusing to provide discounts to federally-qualified health centers, hospitals, and other providers that serve vulnerable patient populations through the 340B Drug Pricing program. Drug manufacturers including Eli Lilly & Company, AstraZeneca PLC, Sanofi SA, Novartis Pharmaceuticals, Merck & Co., and United Therapeutics Corp. put low-income patients at risk of not being able to get their medications by withholding or threatening to withhold these critical and legally required discounts.

“It’s wrong for drug companies to break the rules and make it harder for North Carolinians to afford the medications they need to stay healthy, especially while we face the added health and economic burdens of this pandemic,” said Attorney General Josh Stein. “I urge HHS to take action immediately so people can continue to get the health care they need.”

The 340B Drug Pricing program, which has strong bipartisan support, provides discounts to covered health care providers that serve uninsured and low-income patients, so they can keep costs low even as prescription drug prices rise. As a condition of having their drugs covered by Medicaid and Medicare Part B, Congress required drug manufacturers to enter into Pharmaceutical Pricing Agreements (PPAs) with the HHS Secretary to limit the amount public hospitals, community health centers, and others serving indigent patients have to pay drug manufacturers for medications. These PPAs require the drug companies to offer each covered medication to providers “at or below the applicable ceiling price.” Instead of complying with their obligations, Eli Lilly & Company, AstraZeneca PLC, Sanofi SA, Novartis Pharmaceuticals, Merck & Co., United Therapeutics Corp., and others have unlawfully refused to provide discounts, potentially depriving Americans who rely on them for essential health care resources that they need as the country deals with a public health crisis.

Under the 340B Drug Pricing Program, HHS has the authority to address violations of the program by drug manufacturers. For example, HHS may require manufacturers to reimburse covered health care centers and/or terminate manufacturers’ PPAs. While HHS has recently published regulations establishing an administrative dispute resolution (ADR) process under which covered entities can file complaints and seek relief, the ADR process is not sufficient to address immediate harm caused by drug companies.