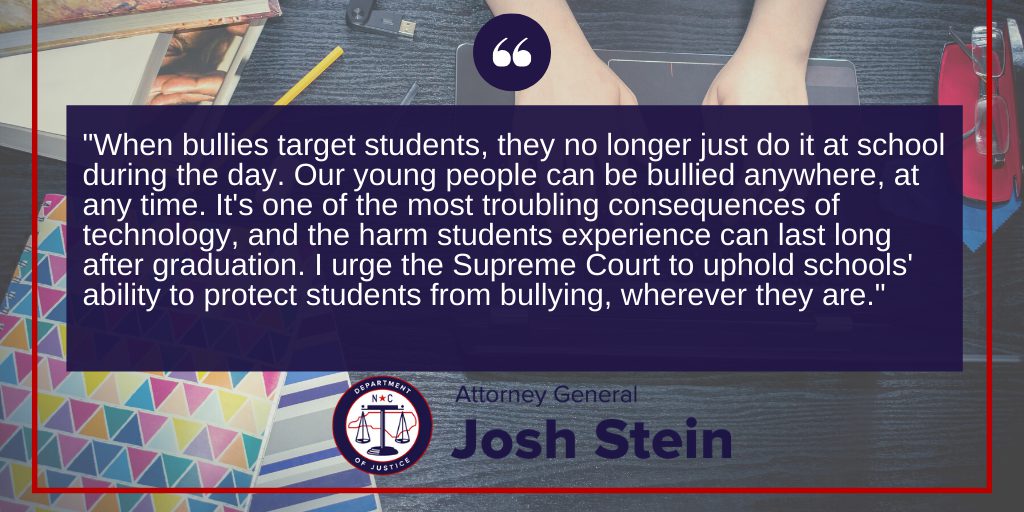 “When bullies target students, they no longer just do it at school during the day,” said Attorney General Josh Stein. “Our young people can be bullied anywhere, at any time. It’s one of the most troubling consequences of technology, and the harm students experience can last long after graduation. I urge the Supreme Court to uphold schools’ ability to protect students from bullying, wherever they are.”

The brief was filed in Mahanoy Area School District v. B.L., a case concerning the ability of schools to hold students accountable for off-campus speech. Because of public schools’ obligations to protect students and promote learning, the Supreme Court has long given them more leeway to regulate student speech under the First Amendment than states have to regulate adults’ speech. But the lower court in this case ruled that schools may never regulate students’ off-campus speech. In their brief, the attorneys general urge the Court to reject this rule, arguing that it would undermine state anti-bullying laws and prevent schools from addressing in-person and online bullying that originates off campus.

Instead, the coalition encourages the court to uphold an existing legal standard that empowers schools to regulate speech that substantially disrupts school or interferes with other students’ ability to learn. In the landmark 1969 Tinker v. Des Moines Independent Community School District decision, the Supreme Court affirmed that students have First Amendment rights in public school settings but also recognized that school officials may regulate student speech that would “materially and substantially disrupt the work and discipline of the school” or interfere with the rights of other students. Every federal appellate court in the country, except the Third Circuit in the case now before the Supreme Court, has applied the Tinker standard to student speech that causes substantial disruption or harm at school, regardless of where the speech originates.

Bullying is harmful and disruptive student behavior that intimidates and targets some students through repeated, aggressive behavior. Bullying can happen through direct aggression, such as physical violence, threats, offensive insults, and mocking, and indirect aggression, such as spreading false or harmful rumors or distributing embarrassing images of a targeted student. All 50 states have passed school anti-bullying laws, and more than two-thirds of these laws, including North Carolina’s, cover some bullying that occurs or originates off-campus.

In their brief, the attorneys general do not take a position on the underlying facts of the case. Instead, they urge the court to treat students’ off-campus speech like any other students’ speech, allowing schools to regulate it when it has substantial effects on the school or other students’ learning, because: