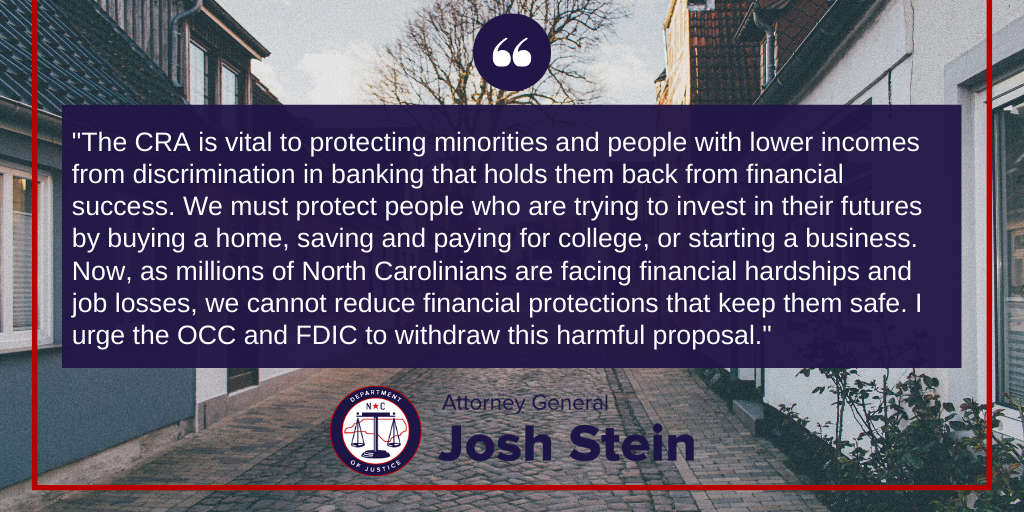 (RALEIGH) Attorney General Josh Stein today urged the Office of the Comptroller of the Currency (OCC) and the Federal Deposit Insurance Corporation (FDIC) to withdraw a proposed rule that threatens to undermine the Community Reinvestment Act (CRA) and congressional efforts to combat banking discrimination. The CRA is a critical civil rights tool that directs trillions of dollars in investments back to low- and moderate-income communities and provides access to financial services and loans that make affordable housing more available and support small businesses across the country.

“The CRA is vital to protecting minorities and people with lower incomes from discrimination in banking that holds them back from financial success,” said Attorney General Josh Stein. “We must protect people who are trying to invest in their futures by buying a home, saving and paying for college, or starting a business. Now, as millions of North Carolinians are facing financial hardships and job losses, we cannot reduce financial protections that keep them safe. I urge the OCC and FDIC to withdraw this harmful proposal.”

In the letter, Attorney General Stein and 21 other attorneys general urge the OCC and FDIC to withdraw the proposal because of fundamental flaws that run counter to the purpose of the CRA. The coalition asserts that the proposal: