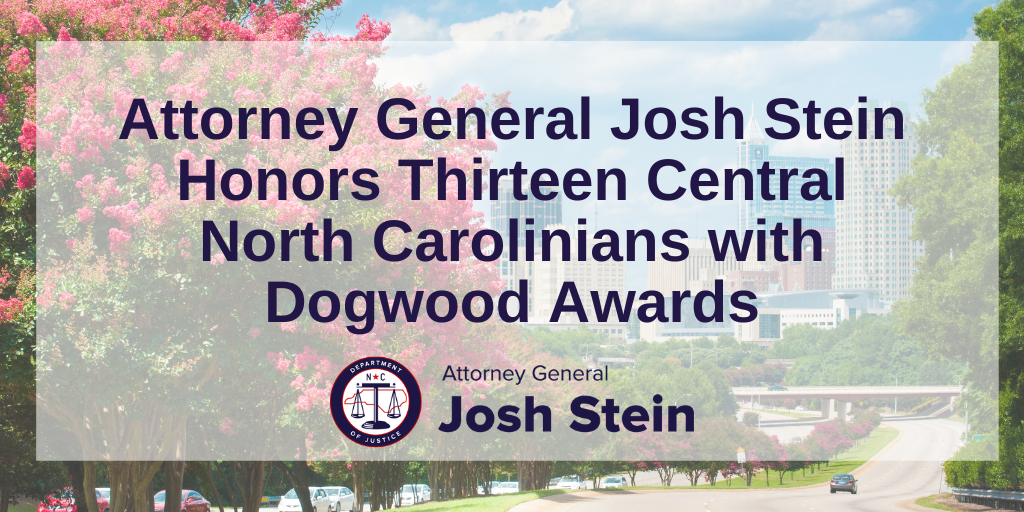 Recipients in central North Carolina are:

“Lieutenant Vaughan fights for justice for sexual assault survivors, no matter how long ago these heinous crimes against them were committed,” said Attorney General Josh Stein. “He’s leading the Durham Police Department’s Cold Case Unit that is succeeding in getting victims of sexual assault the justice they need to find closure.”

Lieutenant Stephen Vaughan is a lieutenant in the Durham Police’s Criminal Investigations Division and leads the department’s Cold Case Unit.

“Lauren, Katherine, and Jenny volunteered dozens of hours this year to spearhead an initiative to train Sexual Assault Nurse Examiners throughout our state,” said Attorney General Josh Stein. “Thanks to their hard work, there are 38 newly-trained SANES in North Carolina, and our criminal justice system will benefit from better evidence collection, and victims of sexual assault will receive the trauma-informed care they need.”

“Dr. Pettigrew helps to make sure women in our state can get the medical care they need and can make the medical decisions that are best for them – as is their right,” said Attorney General Josh Stein. “She is a tireless advocate for women’s reproductive health care and freedom. Unfortunately, her work is more than important than ever.”

Dr. Erica Pettigrew is a physician, medical director for the Orange County Health Department, and is passionate about reproductive freedom.

“As the state president of Duke Energy, Stephen works to keep our keep our state powered, 24 hours a day, 365 days a year,” said Attorney General Josh Stein. “He leads a team that keeps us connected by preparing our energy grid for inclement weather and responding to hurricanes and other storms.”

Stephen De May is president of Duke Energy’s utility operations in North Carolina.

“Sadly, Raleigh recently experienced an all-too-common tragedy – a deadly shooter who murdered five people and shot and injured another two,” said Attorney General Josh Stein. “The Raleigh Police Department responded to this horrific crime immediately and professionally, bringing the horror to an end, even as they grieved one of their own. Police officers run toward danger when the rest of us run away, and we’re grateful to the entire department for doing so on our behalf.”

“District Attorney West has dedicated his career to serving and protecting the people of Cumberland County,” said Attorney General Josh Stein. “He’s worked tirelessly to get violent offenders off our streets, give non-violent offenders a second chance, and give victims of sexual assault, opioid addiction, and human trafficking a chance to rebuild their lives.”

“Over the past two years, I’ve worked closely with District Attorney Woodall on the Task Force for Racial Equity in Criminal Justice,” said Attorney General Josh Stein. “I’ve seen up close his commitment to finding solutions that keep our communities safe and create a fairer, more equal criminal justice system. He has long brought this outlook to his work as district attorney.”

District Attorney Jim Woodall is district attorney of Orange and Chatham counties and a member of the Governor’s Task Force on Racial Equity in Criminal Justice.

“District Attorney Evans has always strived to uphold the ideals of the criminal justice system whether serving as judge, district attorney, or chair of the Governor’s Crime Commission,” said Attorney General Josh Stein. “He’s tackled crime and violence in our communities through numerous pathways, and he searches for solutions that promote public safety and fairness.”

District Attorney Robert Evans is district attorney of Nash, Edgecombe, and Wilson counties and chairs the Governor’s Crime Commission. He previously served as president of the North Carolina Conference of District Attorneys and served as a District Court Judge from 1999 to 2008.

“Wake County residents have benefitted from Grier’s commitment to public service for two decades – and now, Americans throughout the country will benefit as well,” said Attorney General Josh Stein. “In his role at the Pentagon, Grier is drawing upon his years of experience in public office and military service to inform policy to best serve our servicemembers and keep our country safe.”

Representative Grier Martin is the senior advisor to the assistant secretary of defense for manpower and reserve affairs at the Pentagon. He previously served as the North Carolina House Representative for District 34 in Wake County.

“When we lost Sheriff Peterkin late last year, we lost one of North Carolina’s most dedicated public servants,” said Attorney General Josh Stein. “In the outpouring of grief that followed, we heard time and again that Sheriff Peterkin was a strong and compassionate leader, and more importantly, a good man. He leaves behind a legacy of service to the people of Hoke County.”

Sheriff Hubert Peterkin served as Hoke County Sheriff until his death in October 2021.