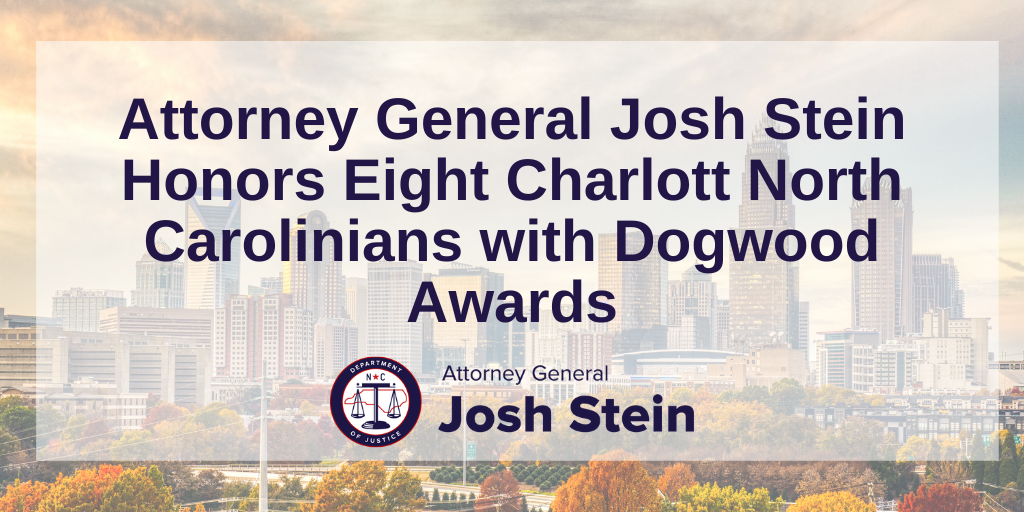 Recipients in the Charlotte area are:

“Karen’s work supports thousands of survivors of sexual assault and domestic violence,” said Attorney General Josh Stein. “She and her colleagues help vulnerable people leave dangerous situations, help them determine their next steps, and support them as they build safer, happier lives.”

Karen Parker is president and CEO of Safe Alliance.

“As a pharmacist and an elected official, Rep. Sasser is doubly familiar with how damaging the opioid crisis has been for communities across our state,” said Attorney General Josh Stein. “I’m grateful for his partnership and his commitment to getting people the treatment they need so they can live healthier lives free of addiction.”

“Fergie is one of my heroes,” said Attorney General Josh Stein. “In 1967, he joined Julius Chambers and my father Adam to form North Carolina’s first integrated law firm. He’s dedicated his entire career to making sure the law works for all people – not just the well-heeled and well-connected. He is a giant in the civil rights movement, and North Carolina is proud to call him one of our own.”

James Ferguson is a founding partner and president of the Ferguson, Chambers, and Sumter, P.A.

“Through the Olive Branch Ministry, Michelle is working to meet people where they are in their lives,” said Attorney General Josh Stein. “She helps those struggling with addiction stay alive and safe until they are able to get treatment and get healthy.”

Michelle Mathis is executive director and co-founder of the Olive Branch Ministry.

“Tameka spearheaded training at Novant to inform health care workers and staff about signs of human trafficking so they can help people escape that horrific nightmare,” said Attorney General Josh Stein. “Recognizing potential victims give us a critical opportunity to get victims to safety and to shine a spotlight on this crime.”

“District Attorney Bell dedicated his career to public service,” said Attorney General Josh Stein. “For more than 14 years, he’s used the pursuit of justice as his north star to the keep the residents of Gaston County safe.”

Locke Bell is the former district attorney for Gaston County.

“Sheriff Reid was a dedicated public servant to the people of Anson County,” said Attorney General Josh Stein. “His loss is deeply felt among those he served and the greater law enforcement community in North Carolina.”

Sheriff Landric Reid served as Anson County Sheriff until his death in September 2022.

“Over the years, Sheriff Clemmons became a good friend whose leadership I admired and respected deeply,” said Attorney General Josh Stein. “The opportunity to serve alongside him on the Task Force for Racial Equity in Criminal Justice gave me a front-row seat to his unyielding efforts to improve the profession of law enforcement and better serve the people of North Carolina.”

Sheriff James Clemmons served as Richmond County Sheriff until his death in August 2021. He also served as a member of the Governor’s Task Force for Racial Equity in Criminal Justice.