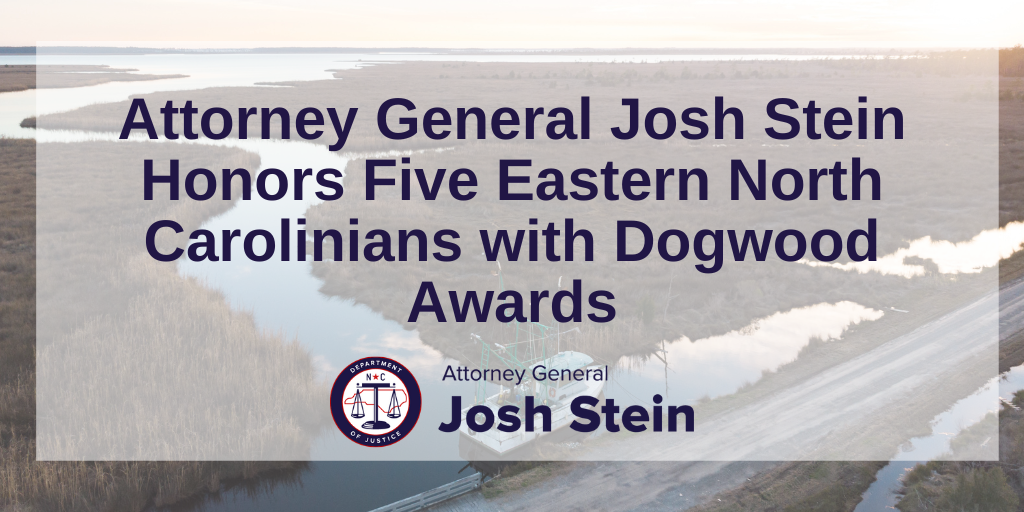 Recipients in eastern North Carolina are:

“Sheriff Dance is an innovator in criminal justice emergency response,” said Attorney General Josh Stein. “Pitt County offers comprehensive resources to address the opioid epidemic in the detention center and is now home to North Carolina’s first county alternative emergency response program. These efforts help some of the most vulnerable community members get the appropriate help they need.”

“District Attorney Evans has always strived to uphold the ideals of the criminal justice system whether serving as judge, district attorney, or chair of the Governor’s Crime Commission,” said Attorney General Josh Stein. “He’s tackled crime and violence in our communities through numerous pathways, and he searches for solutions that promote public safety and fairness.”

District Attorney Robert Evans is district attorney of Nash, Edgecombe, and Wilson counties and chairs the Governor’s Crime Commission. He previously served as president of the North Carolina Conference of District Attorneys and served as a District Court Judge from 1999 to 2008.

“For years, the people of eastern North Carolina have benefitted from Janice’s dedication to public service,” said Attorney General Josh Stein. “Whether it’s serving as U.S. Attorney or an interim town manager, when we need her, Janice steps up. I’m grateful to her for all she’s done to make our state stronger.”

Janice Cole is the interim town manager for the town of Hertford. She previously served as the U.S. Attorney for the Eastern District of North Carolina.

“Before he died, Sheriff Heath served the people of Jones County with honor and integrity for more than 10 years,” said Attorney General Josh Stein. “I appreciate his service to our state and his tireless work to keep people safe.”

Sheriff Danny Health served as Jones County Sheriff until his death in August 2021.