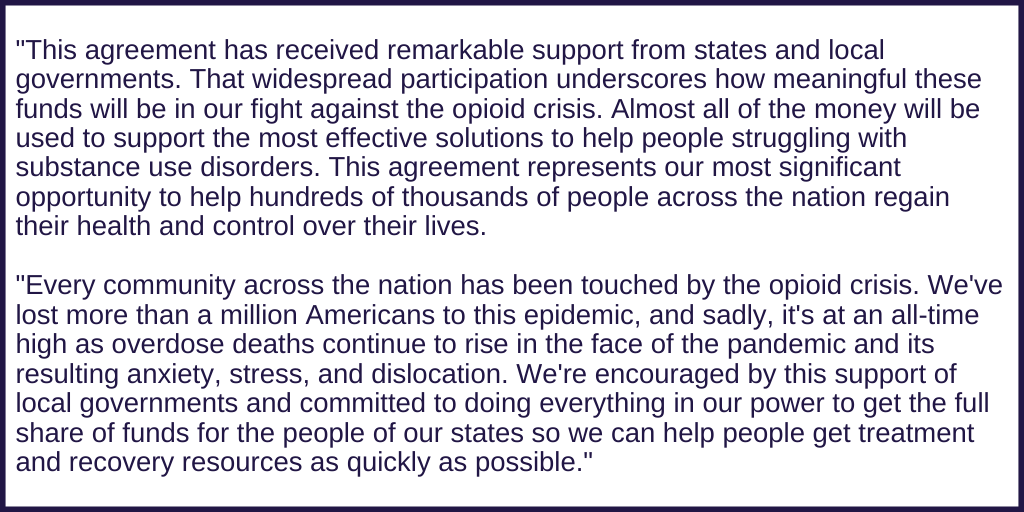 (RALEIGH) Attorney General Josh Stein today marked a key milestone in bringing billions of dollars in much-needed resources to communities across the country via the $26 billion opioid agreement with the nation’s three major pharmaceutical distributors – Cardinal, McKesson, and AmerisourceBergen – and Johnson & Johnson over the companies’ role in creating and fueling the nationwide opioid crisis. Following the 52 states and territories signing on to the agreement since July, thousands of local governments across the country have joined during the subdivision sign-on period. In North Carolina, all 100 counties as well as 47 municipalities have joined. Maximum local government support will help ensure that North Carolina receives its full share of $750 million.

“This agreement has received remarkable support from states and local governments. That widespread participation underscores how meaningful these funds will be in our fight against the opioid crisis. Almost all of the money will be used to support the most effective solutions to help people struggling with substance use disorders. This agreement represents our most significant opportunity to help hundreds of thousands of people across the nation regain their health and control over their lives.

“Every community across the nation has been touched by the opioid crisis. We’ve lost more than a million Americans to this epidemic, and sadly, it’s at an all-time high as overdose deaths continue to rise in the face of the pandemic and its resulting anxiety, stress, and dislocation. We’re encouraged by this support of local governments and committed to doing everything in our power to get the full share of funds for the people of our states so we can help people get treatment and recovery resources as quickly as possible.”