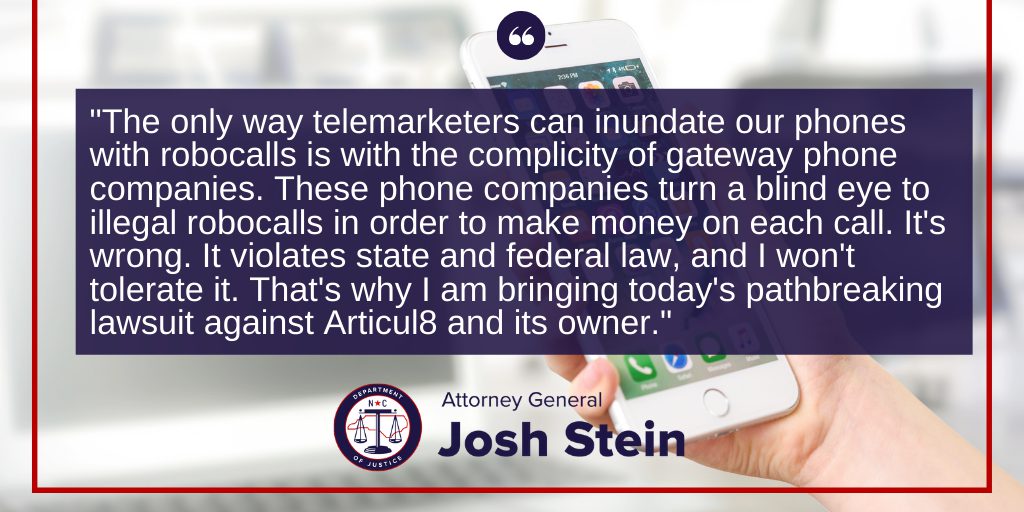 (RALEIGH) Attorney General Josh Stein today sued telephone service provider Articul8 and its owner Paul K. Talbot of Texas for allegedly violating the Telemarketing Sales Rule (TSR) and facilitating illegal and fraudulent telemarketing calls and robocalls that targeted millions of people in the United States and hundreds of thousands of North Carolinians. In a period of just a few months in 2020 and 2021, Articul8 routed more than 65 million calls to phone numbers in North Carolina – some North Carolinians received between 50 and 200 calls on a single day.

“The only way telemarketers can inundate our phones with robocalls is with the complicity of gateway phone companies,” said Attorney General Josh Stein. “These phone companies turn a blind eye to illegal robocalls in order to make money on each call. It’s wrong. It violates state and federal law, and I won’t tolerate it. That’s why I am bringing today’s pathbreaking lawsuit against Articul8 and its owner.”

Attorney General Stein’s lawsuit alleges that since 2015, Articul8 has knowingly allowed domestic and international scammers to route scam calls to millions of people on the U.S. telephone network. The company’s call traffic shows that a high volume of the calls it routes either go unanswered or last for a short period of time and use high volumes of unique caller ID numbers that don’t repeat – all hallmarks of spoofed and unlawful robocalls. Articul8 also routed calls that were made to numbers on the Do Not Call Registry and came from spoofed numbers associated with the Social Security Administration, the FBI, and state and local police departments. The calls that Articul8 routed to North Carolinians included government imposter scams, auto warranty scams, computer security scams, Amazon imposters, and monthly bill scams, as well as a telephone attack on a hospital emergency room.

Articul8 profited by allowing high volumes of calls into the U.S. telephone network, while the scammers profited by tricking hard-working people out of their money. Articul8 knew what it was doing; it continued to allow these calls even after being warned by the telecom industry group that traces suspicious and illegal calls and by federal law enforcement about the calls it was accepting and routing into and across the country.

In January, Attorney General Stein led a bipartisan group of 51 attorneys general urging the FCC to put in place measures that would stem the tide of foreign illegal calls through gateway providers like Articul8. He continues to lead nationwide efforts to work with fellow attorneys general, federal partners, telecom companies, and law enforcement to cut down scam calls.