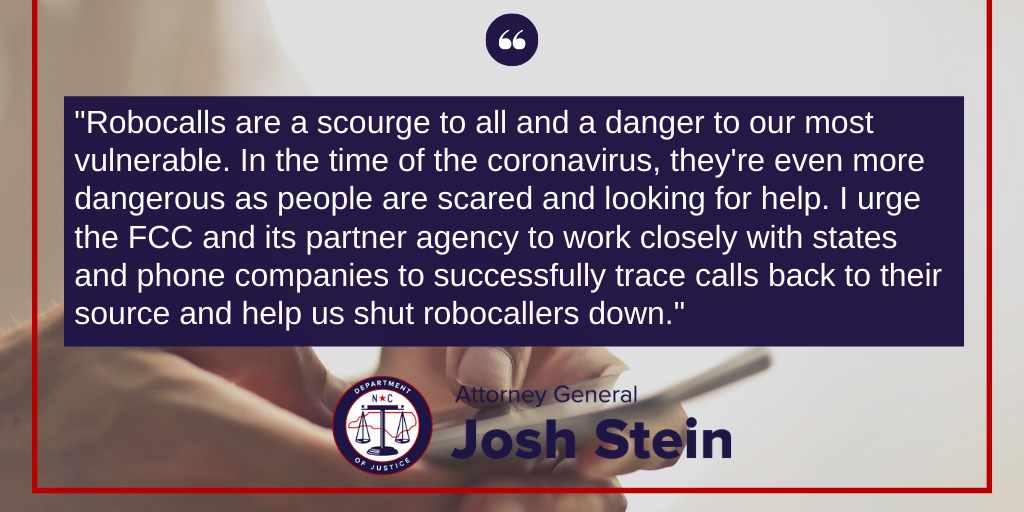 “Robocalls are a scourge to all and a danger to our most vulnerable,” said Attorney General Josh Stein. “In the time of the coronavirus, they’re even more dangerous as people are scared and looking for help. I urge the FCC and its partner agency to work closely with states and phone companies to successfully trace calls back to their source and help us shut robocallers down.”

Under the TRACED Act, which became law in December 2019, the FCC will select a single registered association to manage the work to trace back illegal robocalls. Because a call can pass through the networks of many telecom companies before reaching its final destination, tracing that call—which is key to enforcing our laws against illegal robocallers—requires collaboration among telecom companies and state attorneys general. For the last few years, Attorney General Stein has been a leader in encouraging the telecom industry to increase the number and speed of traceback investigations each month.

In their comments, the states note that traceback investigations are necessary not only to identify illegal robocallers, but also to expose telecom companies that facilitate those calls. Attorney General Stein is engaging phone companies around the country that refuse to cooperate with traceback investigations, are the originating VoIP provider for illegal robocall campaigns, or are the U.S. point of entry for illegal robocalls that originate overseas. He has asked providers to show what steps they are taking to monitor their networks for illegal robocall traffic and to work with law enforcement and industry to trace illegal calls to their source. Telecom companies that are knowingly allowing millions of robocalls to reach American phone users may be violating the Telemarketing Sales Rule, which prohibits assisting or facilitating illegal robocalls.

Attorneys General Stein and Rutledge are joined in today’s effort by the attorneys general of all 50 states, the District of Columbia, and Puerto Rico.