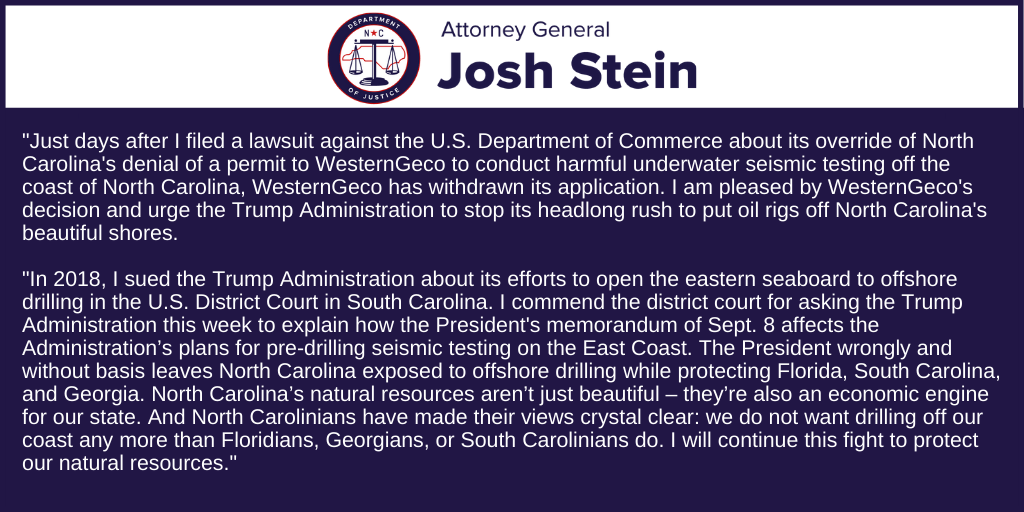 (RALEIGH) Attorney General Josh Stein today released the following statement about news that WesternGeco has withdrawn its application to conduct underwater seismic testing for the oil and gas industries off the coast of North Carolina and that the U.S. District Court in South Carolina has asked the Trump Administration to explain its recent announcement on the offshore drilling moratorium.

“In 2018, I sued the Trump Administration about its efforts to open the eastern seaboard to offshore drilling in the U.S. District Court in South Carolina. I commend the district court for asking the Trump Administration this week to explain how the President’s memorandum of Sept. 8 affects the Administration’s plans for pre-drilling seismic testing on the East Coast. The President wrongly and without basis leaves North Carolina exposed to offshore drilling while protecting Florida, South Carolina, and Georgia. North Carolina’s natural resources aren’t just beautiful – they’re also an economic engine for our state. And North Carolinians have made their views crystal clear: we do not want drilling off our coast any more than Floridians, Georgians, or South Carolinians do. I will continue this fight to protect our natural resources.”