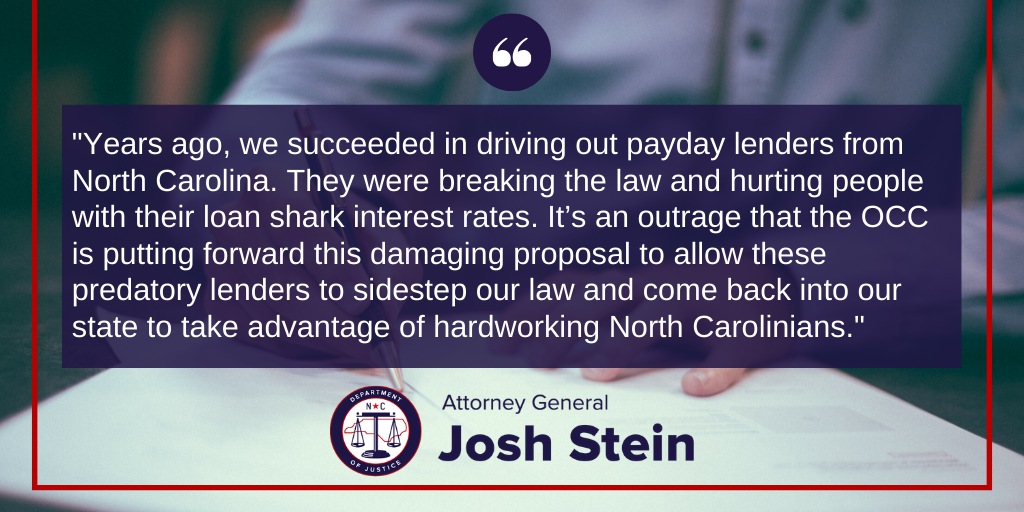 (RALEIGH) Attorney General Josh Stein opposed a federal proposal that would exempt payday and other high-cost lenders from North Carolina’s usury laws that prevent predatory lenders from charging high interest rates on loans and taking advantage of customers. The proposal by the Office of the Comptroller of the Currency (OCC) would allow lenders to charge consumers interest rates that far exceed the rates permissible under North Carolina law.

“Years ago, we succeeded in driving out payday lenders from North Carolina. They were breaking the law and hurting people with their loan shark interest rates,” said Attorney General Josh Stein. “It’s an outrage that the OCC is putting forward this damaging proposal to allow these predatory lenders to sidestep our law and come back into our state to take advantage of hardworking North Carolinians.”

States have long played a critical role in protecting residents from high-cost loans. While federal law provides a carve-out from state law for federally-regulated banks, state law continues to protect residents from predatory lending by non-banks such as payday, auto title, and installment lenders. Congress affirmed states’ role with the Dodd-Frank Wall Street Reform and Consumer Protection Act of 2010, preserving more protective state laws. Yet, the new regulations proposed by OCC would extend the National Bank Act exemption for federally-regulated banks to non-banks such as payday lenders. If finalized, the OCC’s proposed regulations would enable predatory lenders to circumvent these state legal caps through “rent-a-bank” schemes, in which banks get paid to act as lenders in name only, passing along their state law exemptions to non-bank payday lenders.

The proposed rule is a sharp reversal in policy and a deliberate attempt to evade state laws that target predatory lending, including North Carolina’s Consumer Finance Act, which limits interest rates charged on consumer loans made by licensed lenders to 30 percent or less. The multistate coalition argues in their comment letter that the OCC’s attempt to extend National Bank Act preemption to non-banks conflicts with the National Bank Act and Dodd-Frank Act, exceeds the OCC’s statutory authority, and violates the Administrative Procedure Act.