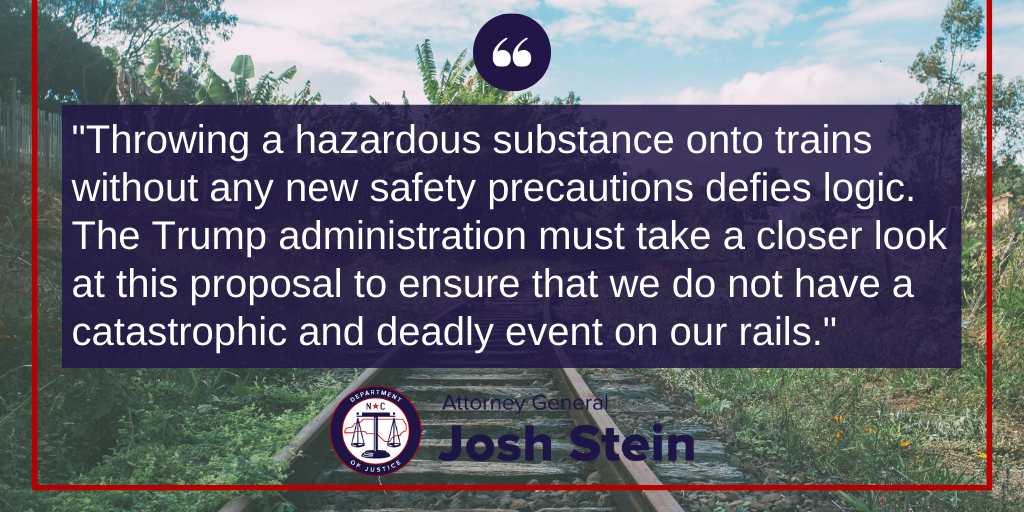 (RALEIGH) Attorney General Josh Stein is urging the Trump administration to withdraw a proposal that would allow for the bulk transport of refrigerated liquid methane, more commonly known as liquefied natural gas (LNG) along existing rail corridors without any added safety measures. The proposal lacks basic safety precautions to mitigate the risk of catastrophic accidents and fails to adequately evaluate the environmental and climate impacts of expanding domestic and global access to natural gas, a potent source of greenhouse gases—as federal agencies are required to do under the National Environmental Policy Act. Moreover, the proposal was hastily rolled out prior to the completion of critical safety studies that are currently underway.

“Throwing a hazardous substance onto trains without any new safety precautions defies logic,” said Attorney General Josh Stein. “The Trump administration must take a closer look at this proposal to ensure that we do not have a catastrophic and deadly event on our rails.”

LNG is an extremely hazardous substance. If not stored under cryogenic conditions, -260℉ or lower, it will quickly volatize into natural gas, a highly flammable, odorless, and potentially explosive substance. Federal Hazardous Materials Regulations currently do not permit LNG to be transported by rail, but an Executive Order signed in April 2019 by President Trump directed the U.S. Department of Transportation to propose a rule that would permit “LNG to be transported in approved rail tank cars” and to finalize that rulemaking by May 2020.

This proposal would allow LNG to be transported through densely populated areas, potentially in unit trains of up to 100 tank cars operated by just a single conductor and on the same rail lines high speed passenger trains use, all without operational controls as to routing, speed, braking, and train crew separation distance.

The National Transportation Safety Board has cautioned that “the risks of catastrophic LNG releases in accidents is too great not to have operational controls in place before large blocks of tank cars and unit trains proliferate.”