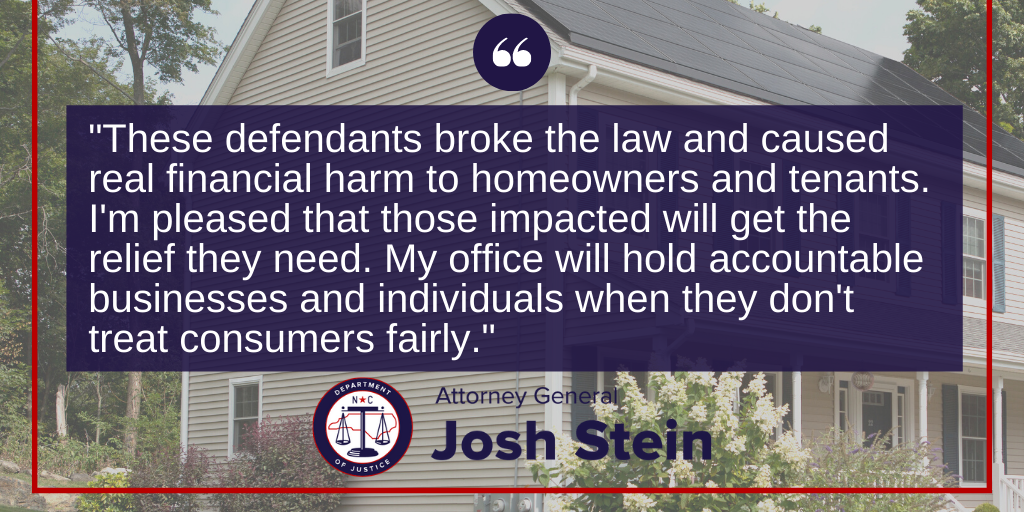 Affected consumers will receive $110,000 in restitution

(RALEIGH) Attorney General Josh Stein reached a $120,000 consent judgment with J.S. Enterprises of Swansboro LLC and James Morris Stallings III to resolve a lawsuit alleging violations of North Carolina’s Unfair and Deceptive Trade Practices Act related to home buying schemes. The judgement requires the defendants to pay $110,000 to eligible affected consumers and $10,000 in recoveries for the state of North Carolina, and also requires them to stop using illegal purchase, sale, and lease agreements and land trust schemes in their real estate property transactions.

“These defendants broke the law and caused real financial harm to homeowners and tenants,” said Attorney General Josh Stein. “I’m pleased that those impacted will get the relief they need. My office will hold accountable businesses and individuals when they don’t treat consumers fairly.”

An estimated 80 to 120 consumers are eligible for relief under the settlement. In the coming weeks, consumers who are eligible for restitution will receive written notice from the Attorney General’s Office with claim forms and additional information to help them file claims.

Attorney General Stein took legal action against Stallings and J.S. Enterprises, which primarily operate in Onslow, Pender, and surrounding eastern North Carolina counties, in April 2019. His lawsuit alleged that the defendants bought properties from distressed homeowners with promises to deliver cash in hand or pay all closing costs, amongst other false advertising. In reality, the defendants gave these homeowners promissory notes with small monthly payments and zero percent interest over a long period instead of the cash at the time of sale. In other instances, the defendants acquired consumers’ homes without paying off their existing mortgages, and without making consumers aware that they would remain obligated to pay the underlying mortgages.

Once they bought the properties, the defendants then leased them to consumers in financial hardship or with poor credit histories using lease agreements that violated North Carolina’s landlord-tenant law. These agreements led consumers to believe that they would ultimately own the home and asked them to make and pay for repairs to the properties they were leasing.

The settlement requires the defendants to sell or refinance properties so that consumers who sold their homes can be repaid in full. Moving forward, the defendants must now lease properties in compliance with state law and using documents approved by the North Carolina Board of Realtors.

Per the terms of the settlement, former North Carolina Superior Court Judge Gary E. Trawick will serve as the settlement monitor to review consumer claims for financial remediation and to ensure the defendants comply with the order.