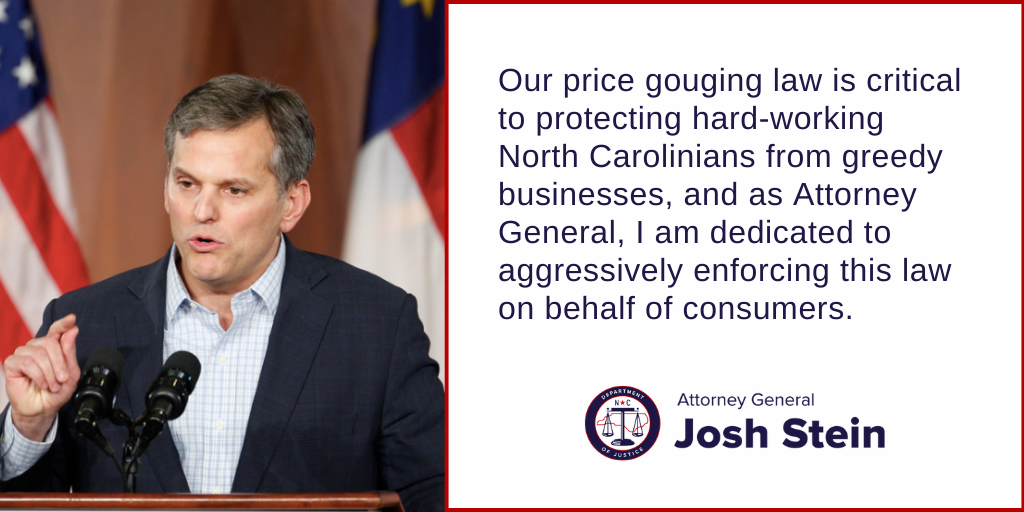 “Price gouging is unconscionable and illegal – it’s taking advantage of people who are desperate because they are already dealing with a crisis,” said Attorney General Josh Stein. “Our price gouging law is critical to protecting hard-working North Carolinians from greedy businesses, and as Attorney General, I am dedicated to aggressively enforcing this law on behalf of consumers. The court should not limit states’ ability to safeguard consumers and take action against bad actors.”

In their brief filed in the U.S. Court of Appeals for the Sixth Circuit, the coalition of attorneys general state that national and local emergencies, such as the pandemic, create significant shortages for essential items. State price gouging laws are essential to ensuring that goods can be fairly allocated among residents, and to preventing bad actors from profiting off of residents by charging excessively high prices for scarce goods. Furthermore, regulating price gouging falls under states’ responsibility to aid vulnerable consumers during an emergency. Additionally, price gouging laws do not directly control the price of goods for out-of-state sales or create an actual conflict among state regulations.

North Carolina’s price gouging law goes into effect when the governor declares a state of emergency, and Attorney General Stein has already taken action to fight price gouging during the pandemic. In August, he filed a lawsuit against Stephen Gould Corporation alleging that it pitched extremely high-priced N95 or similar face masks to the North Carolina Emergency Management Unit of the North Carolina Department of Public Safety, Duke Health, UNC Health, and the Charlotte Chapter of the American Red Cross. The defendants allegedly marked up the prices on these masks by more than 100 percent, which would have resulted in $30 million in profits per transaction. Additionally, after Hurricanes Michael and Florence devastated North Carolina in 2018, Attorney General Stein brought seven price gouging lawsuits against 22 defendants and won more than $825,000 in judgments and settlements.

A copy of the brief is available here: Online Merchants Guild Amicus Brief Final To File.