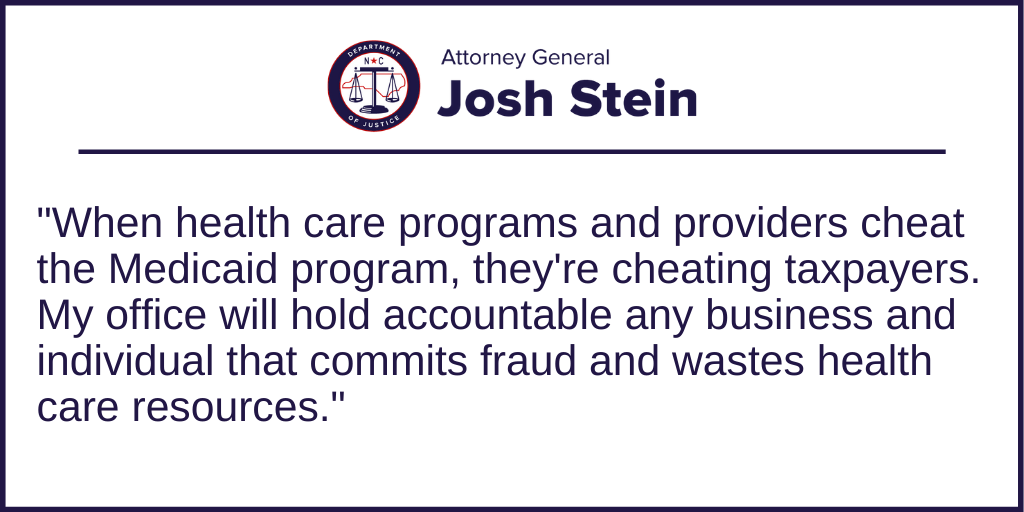 “When health care professionals engage in deceptive schemes for the sake of their bottom line, their patients’ health is no longer their first priority,” said U.S. Attorney Andrew Murray. “Billing Medicare and Medicaid for unnecessary testing wastes taxpayer dollars and diverts funds intended for needed medical care. Working with our state partners, we will use all resources and tools at our disposal to pursue and hold accountable individuals who perpetrate fraud on federal health care programs.”

Before it ceased operations, CCHN consisted of a group of health care practices, including multiple locations in the Western District of North Carolina that provided family medicine, immediate care, and pain management services. The settlement resolves allegations that from May 1, 2015, through November 30, 2015, CCHN billed the Medicare and Medicaid programs for unnecessary diagnostic procedures including positional nystagmus testing, rotational axis testing, nerve conduction testing, and autonomous nervous system testing.

The allegations stem from a whistleblower lawsuit filed under the federal False Claims Act. The settlement is a result of the coordinated effort between the Department of Health and Human Services Office of the Inspector General, the North Carolina Attorney General’s Medicaid Investigations Division, and the United States Attorney’s Office for the Western District of North Carolina.

The claims resolved in this settlement are allegations only and there has been no determination of liability.