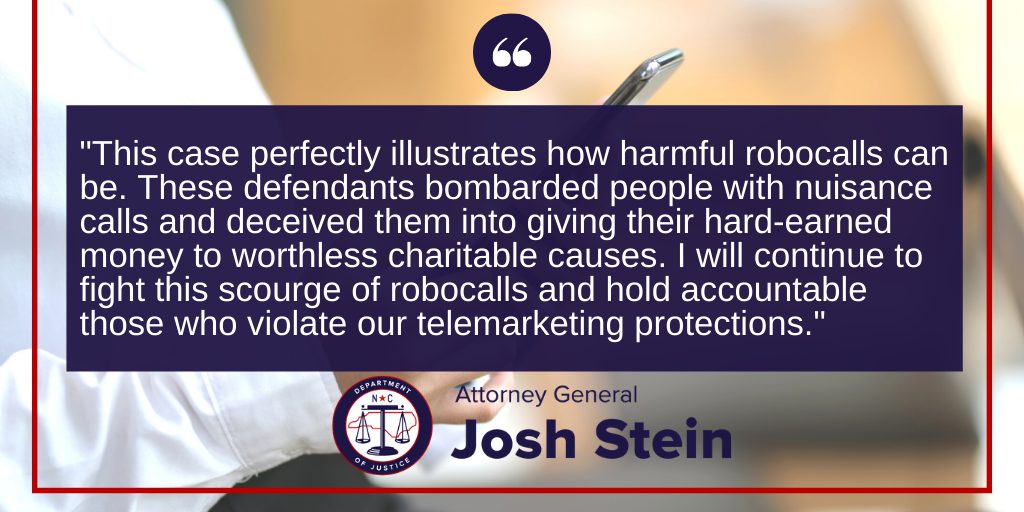 (RALEIGH) Attorney General Josh Stein, along with the Federal Trade Commission and 46 agencies from 38 states and the District of Columbia, today shut down a massive telefunding operation by Associated Community Services (ACS) and a number of related defendants that bombarded 67 million consumers with 1.3 billion deceptive charitable fundraising calls. Defendants collected more than $110 million using their deceptive solicitations that claimed to support veterans, children, and firefighters.

“This case perfectly illustrates how harmful robocalls can be,” said Attorney General Josh Stein. “These defendants bombarded people with nuisance calls and deceived them into giving their hard-earned money to worthless charitable causes. I will continue to fight this scourge of robocalls and hold accountable those who violate our telemarketing protections.”

ACS and a number of related defendants have agreed to settle charges by the FTC and state agencies that they duped generous Americans into donating to charities that failed to provide the services they promised. The complaint alleges that the defendants violated North Carolina consumer and charities laws, the FTC Act, and the Telemarketing Sales Rule since at least 2008 by making deceptive pitches on behalf of numerous organizations that claimed to support homeless veterans, victims of house fires, breast cancer patients, children with autism, and other causes. The complaint also charged ACS with making harassing calls by calling more than 1.3 million phone numbers more than ten times a week in a single week and 7.8 million numbers more than twice in an hour. More than 500 phone numbers were even called 5,000 times or more. In many instances, the defendants unlawfully pre-recorded messages in calls to first-time donors and failed to give people the ability to opt out of future calls.

The defendants knew that the organizations for which they were fundraising spent little or no money on the charitable causes they claimed to support—in some cases as little as one-tenth of one percent. The defendants kept as much 90 cents of every dollar they solicited from generous donors on behalf of the charities.

Each of the defendants will be permanently prohibited from doing fundraising work, consulting on behalf of charities and nonprofits, making robocalls for telemarketing, using abusive calling practices, or misrepresenting products and services. Two corporate defendants—Directele Inc. and The Dale Corporation—will be required to cease operations and dissolve.

In 2020, North Carolinians reported more than 10,000 robocalls and unwanted telemarketing calls to the North Carolina Department of Justice—the number one consumer complaint filed with the office. Attorney General Stein is leading efforts nationwide to confront these incessant calls. In December, he won a $14 million penalty against Dish Network for engaging in illegal telemarketing and violating do-not-call laws, the largest-ever state penalty for do-not-call violations. In June, he sued Texas robocallers who allegedly made more than 75 million robocalls to North Carolina phone users, including more than 34 million calls to numbers on the national Do Not Call Registry. He also launched the Robocall Report Task Force so North Carolinians can report robocalls online (www.ncdoj.gov/norobo) and through a dedicated robo-report hotline (1-844-8-NO-ROBO).