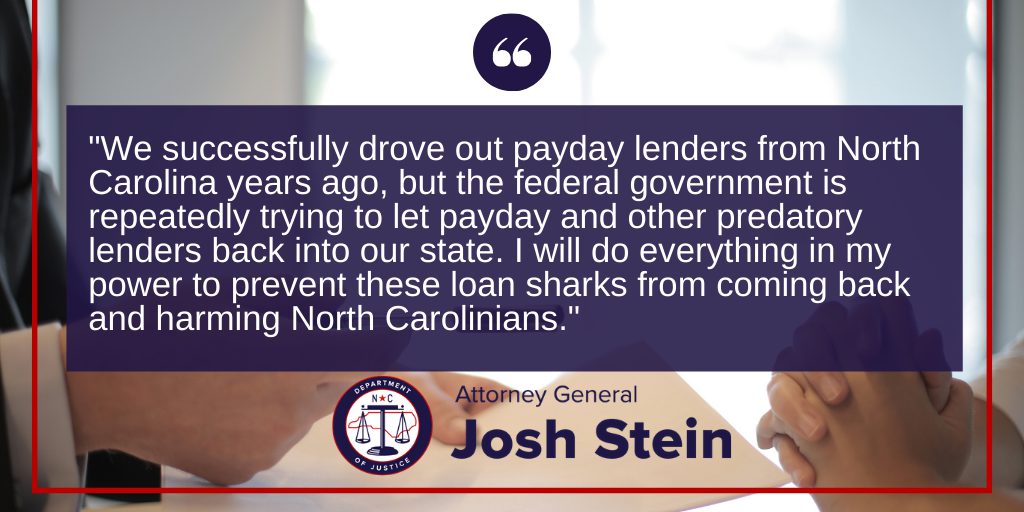 (RALEIGH) Attorney General Josh Stein today filed a lawsuit to stop the Trump administration from implementing a new rule that would allow predatory lenders to take advantage of vulnerable North Carolinians by charging high interest rates on loans in violation of state law.

“We successfully drove out payday lenders from North Carolina years ago, but the federal government is repeatedly trying to let payday and other predatory lenders back into our state,” said Attorney General Josh Stein. “I will do everything in my power to prevent these loan sharks from coming back and harming North Carolinians.”

Under the federal National Bank Act, national banks that are licensed and regulated by the Office of the Comptroller of the Currency (OCC) can charge interest on loans at the maximum rate permitted by their “home” state, even when that interest rate exceeds the 30 percent interest rate limit in North Carolina. National banks have this privilege because they are subject to extensive federal oversight and supervision.

For years, courts have stopped non-bank lenders from partnering with national banks to take advantage of this ability to charge higher interest rates. Under the OCC’s new rule, courts would no longer be able to scrutinize many of these partnerships, allowing predatory lenders to use “rent-a-bank” schemes to take advantage of hardworking people. Further, the new rule would allow the bank to instantly sell the loan and never take any meaningful risk on it.

The coalition argues that the rule stands in direct conflict with the National Bank Act and the Dodd-Frank Act, exceeds the OCC’s statutory authority, and violates the Administrative Procedure Act.

Attorney General Stein is joined in filing this lawsuit by the Attorneys General of California, Colorado, Massachusetts, Minnesota, New Jersey, New York, and the District of Columbia.