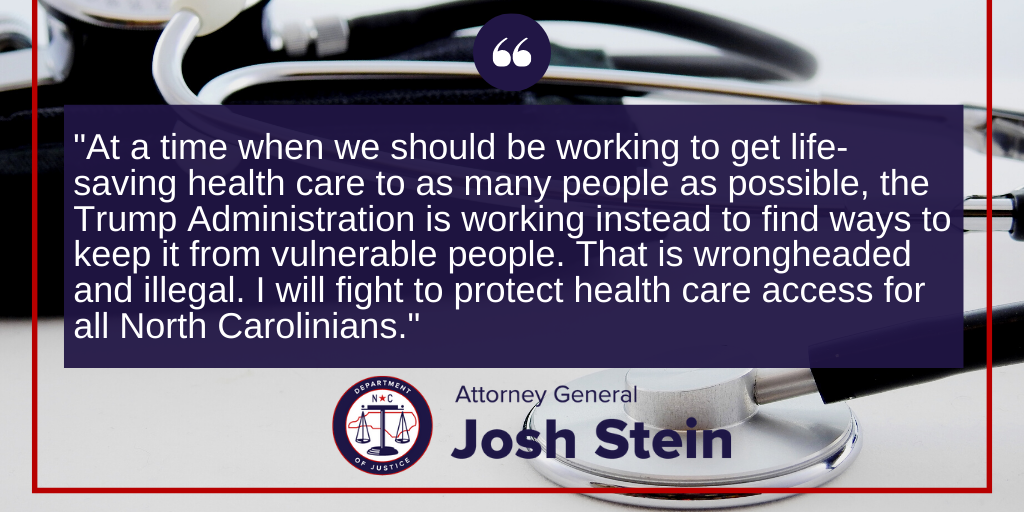 (RALEIGH) Attorney General Josh Stein today joined a coalition of 23 attorneys general in filing a lawsuit to stop a new Trump Administration rule that makes it easier for health care providers and insurance companies to discriminate against certain vulnerable and protected classes of Americans. In a lawsuit (attached) filed against the U.S. Department of Health and Human Services (HHS), HHS Secretary Alex Azar, and the head of HHS’s Office of Civil Rights, Roger Severino, the coalition of attorneys general argues that the new rule emboldens providers and insurers to discriminate against LGBTQ+ people, those with limited English proficiency, and women, among others, by stripping express protections for these groups in HHS regulations that implement the nondiscrimination provision of the Patient Protection and Affordable Care Act (ACA). This provision of the ACA prohibits discrimination based on race, color, national origin, sex, disability, or age by health programs or facilities that receive federal funds, but the Trump Administration is seeking to undermine many of those protections.

“At a time when we should be working to get life-saving health care to as many people as possible, the Trump Administration is working instead to find ways to keep it from vulnerable people,” said Attorney General Josh Stein. “That is wrongheaded and illegal. I will fight to protect health care access for all North Carolinians.”

But, despite numerous failed legislative and legal battles to repeal and dismantle the ACA, the Trump Administration’s new rule would now eliminate many of the express protections contained in the Section 1557 regulations, unlawfully exclude many health insurers from Section 1557’s scope, and would embolden health care providers and health insurers to deny care and insurance coverage. The new rule would also impose unreasonable barriers and impede timely access to health care for Americans, in violation of Section 1554 of the ACA.

Today’s lawsuit argues that HHS has unlawfully ignored the harms that the new rule will impose on vulnerable populations, including LGBTQ+ individuals, individuals with limited English proficiency, and women, as well as other protected classes. The coalition additionally contends that HHS has failed to justify why it abandoned its prior policy, which, among other things, explicitly prohibited discrimination in health care and required health entities to provide meaningful language assistance services to individuals with limited English proficiency, including notifying them of their rights to translation and interpretation services. The lawsuit finally alleges that the Trump Administration was motivated by animus toward the transgender community in issuing this rule.

The coalition specifically argues that the new rule is arbitrary, capricious, and contrary to law under the Administrative Procedure Act (APA), and that it violates the equal protection guarantee of the Fifth Amendment.