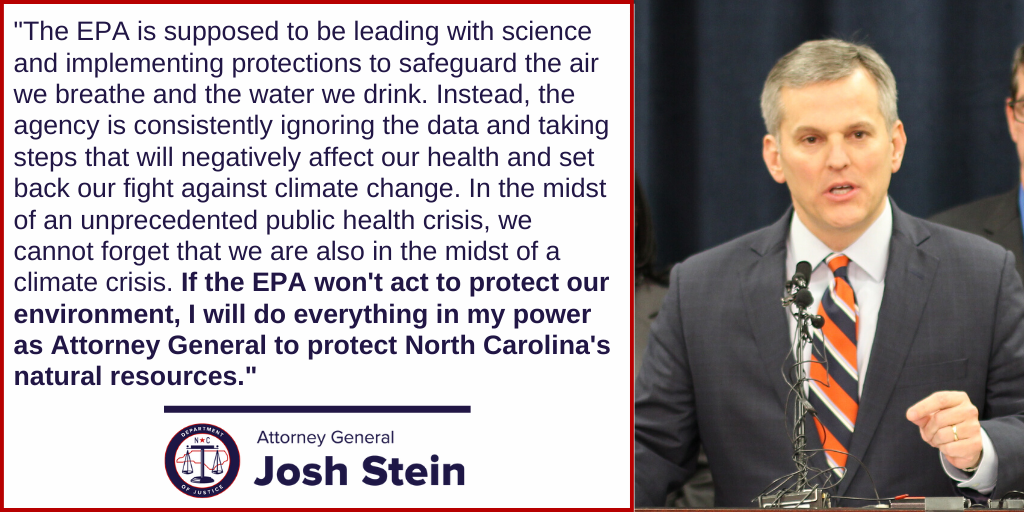 (RALEIGH) Attorney General Josh Stein this week filed two lawsuits against the Environmental Protection Agency (EPA) over the agency’s rollbacks of decades of environmental protections under the Clean Air Act and the Clean Water Act that would harm North Carolinians’ health and North Carolina’s environment.

“The EPA is supposed to be leading with science and implementing protections to safeguard the air we breathe and the water we drink,” said Attorney General Josh Stein. “Instead, the agency is consistently ignoring the data and taking steps that will negatively affect our health and set back our fight against climate change. In the midst of an unprecedented public health crisis, we cannot forget that we are also in the midst of a climate crisis. If the EPA won’t act to protect our environment, I will do everything in my power as Attorney General to protect North Carolina’s natural resources.”

Yesterday, Attorney General Stein joined a coalition of 25 states, cities, and counties challenging the EPA’s reversal of its finding that Mercury and Air Toxics Standards (MATS) regulation is appropriate and necessary under the Clean Air Act to regulate mercury and other toxic air pollution from coal- and oil-fired power plants. The new rule undermines the landmark 2012 MATS rule that has substantially reduced emissions of mercury and other hazardous pollutants, like arsenic and chromium, that harm human health, wildlife, and the environment, and pose especially significant health risks to children and pregnant women.

Attorney General Stein previously called on the EPA to withdraw its proposed rule in April 2019. The agency’s final rule seeks to undermine Mercury and Air Toxics Standards even though power plants have been complying with the standards since 2015 and have already installed pollution-control technologies.

In a second lawsuit filed today, Attorney General Stein challenged the EPA’s final rule curtailing states’ authority under the Clean Water Act. For more than 30 years, the EPA has consistently acknowledged that Section 401 of the Clean Water Act gives states the authority to review, impose conditions on, or deny certification for federally-permitted projects that may result in discharges into the waters of the United State. These projects range from housing and commercial land development to hydropower and pipeline construction. However, following President Trump’s April 2019 executive order, the EPA issued a final rule in July 2020 that arbitrarily re-wrote existing water quality certification regulations to limit state authority under the Clean Water Act.

The rule will impair states’ ability to fully review project proposals for water quality impacts and make it harder for states to protect their waters and wetlands. The multistate coalition challenging the rule represents a substantial portion of the United States, including the entirety of the Pacific Coast from Mexico to Canada, large portions of the Atlantic Coast, the Great Lakes and Lake Champlain, the Chesapeake Bay, and the majority of the Columbia River. In today’s filing, the coalition argues that the EPA’s restriction of state authority violates the Administrative Procedure Act, the Clean Water Act, binding Supreme Court precedent interpreting Section 401, and the EPA’s own guidance on Section 401.