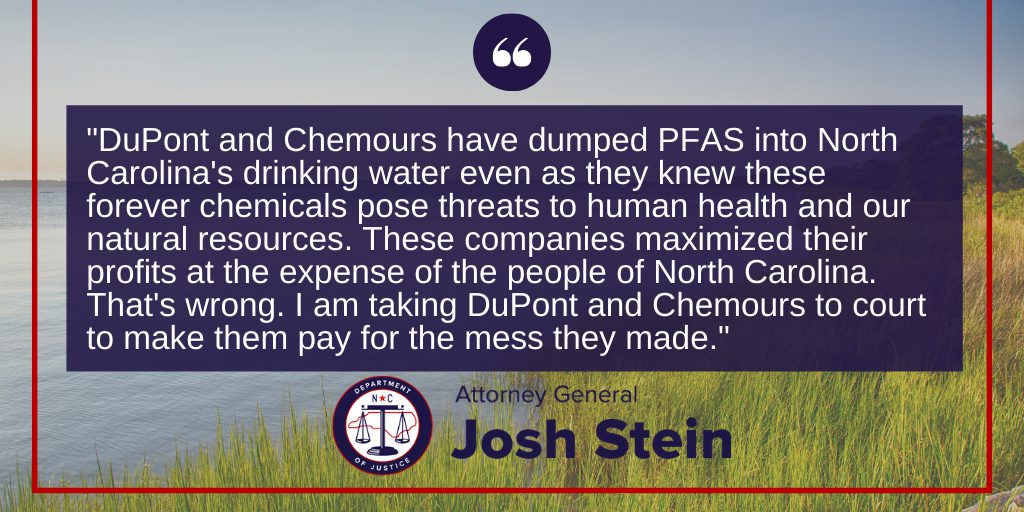 (RALEIGH) Attorney General Josh Stein today filed a lawsuit against DuPont, Chemours, and related companies to hold them accountable for the damage their manufacture, use, and disposal of PFAS chemicals have caused to North Carolina’s natural resources. According to the complaint filed today, DuPont and Chemours have contaminated the land, air, water, and other valuable natural resources around their Fayetteville Works Facility, in the Cape Fear River, and in downstream communities with PFAS for decades. All the while, DuPont knew that these chemicals pose significant threats to human health and the environment. In August, Attorney General Stein announced a formal investigation into those responsible for PFAS contamination in North Carolina. This is the first case the Attorney General is bringing as a result of that ongoing investigation, which may result in additional legal action.

“DuPont and Chemours have dumped PFAS into North Carolina’s drinking water even as they knew these forever chemicals pose threats to human health and our natural resources,” said Attorney General Josh Stein. “These companies maximized their profits at the expense of the people of North Carolina. That’s wrong. I am taking DuPont and Chemours to court to make them pay for the mess they made.”

The lawsuit, filed in Cumberland County Superior Court, seeks to hold both Chemours and DuPont accountable for the damages they have caused to North Carolina’s drinking water supplies, fisheries, and other natural resources. It also asks the court to void certain corporate transactions among the companies – a complex scheme designed to shield billions of dollars in assets from the State and others who the companies knew were damaged by their conduct.

PFAS, or forever chemicals, resist biodegradation, are mobile, persist in the environment, and accumulate in living organisms – including people. These chemicals are harmful to human health. They can cause kidney and testicular cancer, thyroid disease, ulcerative colitis, cholesterol, hypertension, and damage to the immune system.

In 2017, NCDOJ lawyers took Chemours to court on behalf of the North Carolina Department of Environmental Quality (“DEQ”) to stop Chemours from discharging PFAS, including GenX, into the Cape Fear River and emitting those substances into the air. As a result of DEQ’s successful litigation, a Consent Order was issued by the court in 2019, and amended yesterday. The Order requires Chemours to install air emissions control technology to reduce PFAS emissions by 99.9%; prevent discharge of PFAS to the Cape Fear River; provide clean drinking water to affected private well-users near the Fayetteville Works; assess the extent of existing contamination; and develop a plan to clean up historical contamination of soil and groundwater on an expedited basis. Yesterday’s amendment requires Chemours to take significant additional actions to reduce PFAS entering the Cape Fear River through residual groundwater contamination.

DEQ described its Consent Order as first steps in a broad strategy to address PFAS in the Cape Fear River Basin, and DEQ retained its authority to investigate other contributors to PFAS contamination, including contributors upstream of the facility and to take additional legal action if necessary based on new information. Attorney General Stein’s lawsuit filed today compliments DEQ’s regulatory actions.

More from Attorney General Stein on this issue: