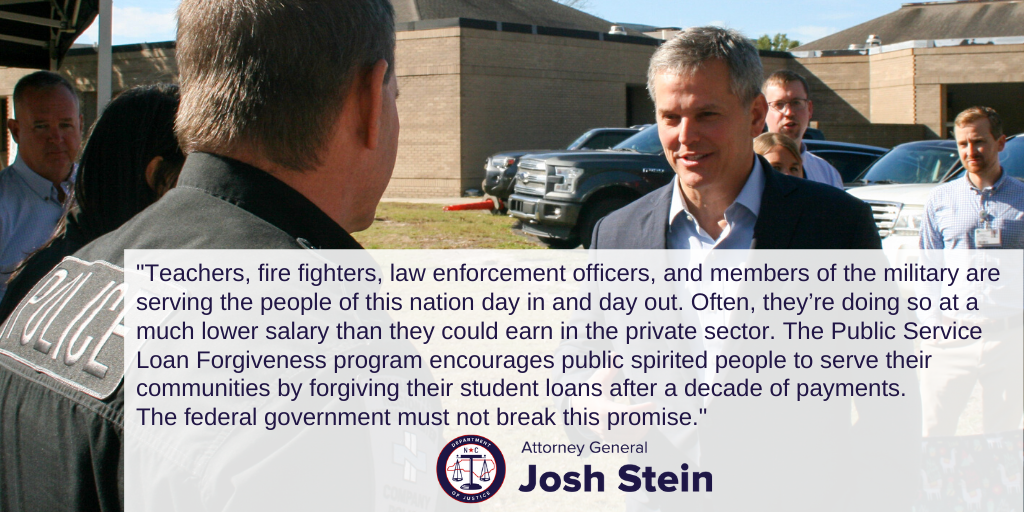 (RALEIGH) Attorney General Josh Stein today led a coalition of 21 attorneys general in filing an amicus brief with the U.S. District Court for the District of Columbia in support of public servants who were promised federal student loan debt forgiveness in exchange for 10 years of public service, but who, after serving those 10 years, have been denied debt relief due to the U.S. Department of Education’s mismanagement of the program.

According to these public servant borrowers and federal government reports, the U.S. Department of Education has committed pervasive errors in administering the Public Service Loan Forgiveness (PSLF) program. As a result, less than one percent of all applicants received relief. In his brief, Attorney General Stein stressed the importance of the PSLF programs and asked the court to closely review borrowers’ specific allegations.

“Teachers, fire fighters, law enforcement officers, and members of the military are serving the people of this nation day in and day out,” said Attorney General Josh Stein. “Often, they’re doing so at a much lower salary than they could earn in the private sector. The Public Service Loan Forgiveness program encourages public spirited people to serve their communities by forgiving their student loans after a decade of payments. The federal government must not break this promise.”

The PSLF program allows borrowers who pay down their loans while working for 10 years in a qualifying public service job, such as teachers, law enforcement officers, and members of the military, to have the remainder of their federal direct student loans forgiven. This program gives public servants the chance to pass up higher, private sector salaries and still pay off their student debt. In North Carolina, the average starting teacher salary is $35,000. Average student loan debt is $26,526. PSLF has the potential to allow teachers to begin a career in education while still paying off their loans. According to Department of Education reports, more than one million Americans intend to apply for PSLF. Nearly two-thirds of these people had annual salaries of less than $50,000.

However, the Department of Education has denied relief to more than 99 percent of applicants. The first PSLF borrowers became eligible for forgiveness in October 2017. Since then, 90,962 people have applied for loan discharge pursuant to PSLF, but only 845 people have received it.

Federal government reports admit that the Department of Education made pervasive errors, including mistakes in record-keeping, providing inaccurate information to borrowers, steering borrowers to take actions that made them ineligible, and failing to explain why applications were denied. In this lawsuit, student borrowers claim that these types of errors led the Department to deny their PSLF applications. In his brief, Attorney General Stein asks the court to thoroughly review these borrowers’ claims to determine whether they should have the opportunity to prove their case.